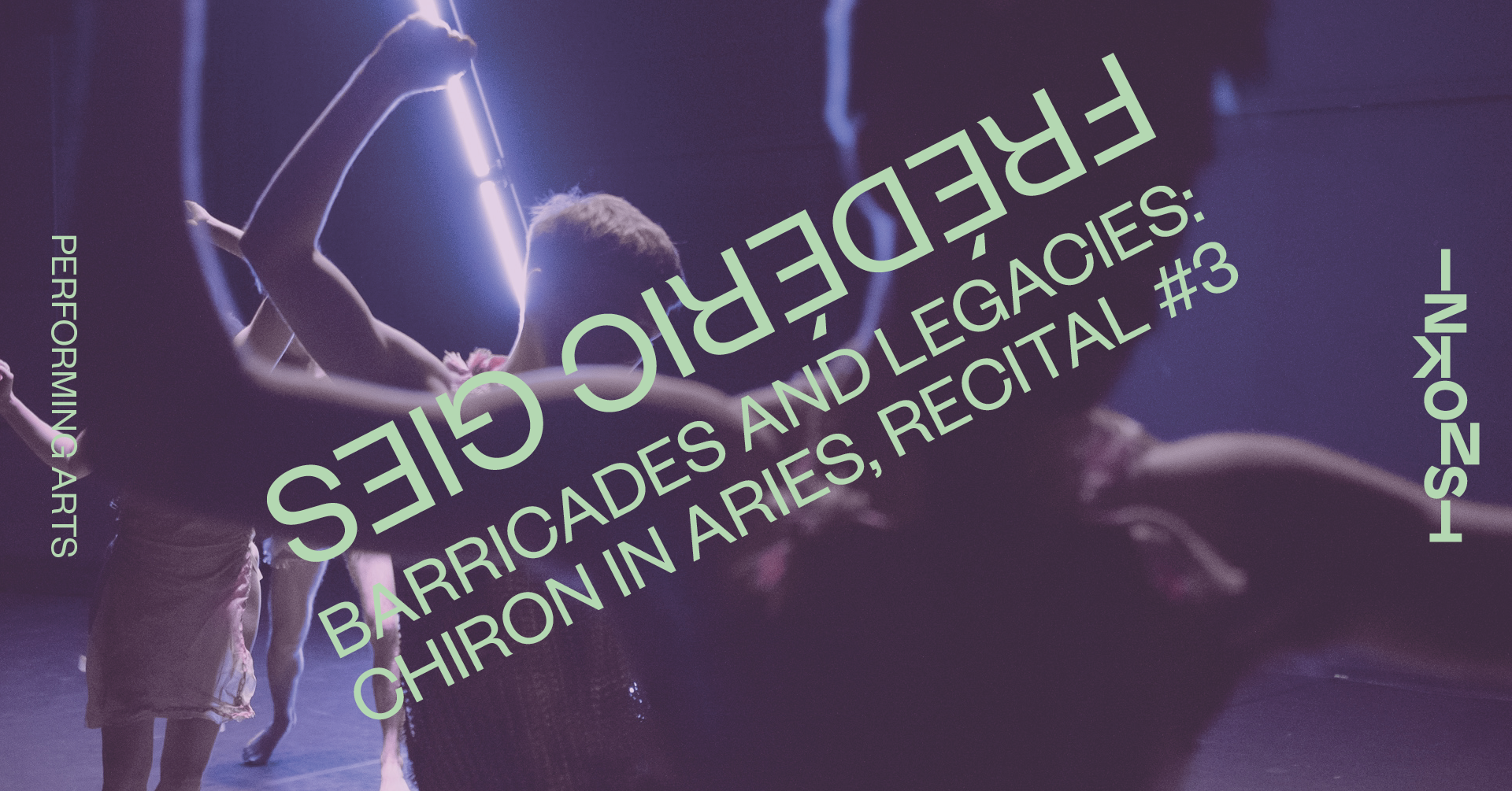 Depicting a mythological world, 8 dancers engages in bold solos and duos. Expressing turmoil and urgency, with queer kinship as a foundation.

Barricades and Legacies: Chiron in Aries, Recital #3, a piece of 7 dancers, brings to the forefront an unbridled, virtuosic and meticulously detailed dance. It is conceived as an epic, a long poem depicting a mythological world. Expressing turmoil and urgency, each dancer engages in bold, rebellious dances, in solos and duos. Progressively a collective emerges, with queer kinship as a foundation.

The piece is the third chapter of the Chiron in Aries cycle of pieces, which references Greek mythology and its absorption by astrology. Following Warriors: Chiron in Aries, Recital #1 (2020) and Hope: Chiron in Aries, Recital #2 (2021), both presented at Inkonst. In Greek mythology, Chiron was a Centaur raised by Apollo who initiated him to the arts of healing, music and prophecy, which made him different from the other violent and unruly Centaurs. When he was hit by a poisoned arrow he was left with a wound that never healed. In astrology, the minor planet Chiron is called “the wounded healer” and represents our deepest wounds and our capacity to heal. The sign Aries represents the ego, willpower, desire and the warrior within us. When Chiron is in Aries (as between 2018 and 2027), it addresses our deepest wounds in relation to our sense of self and our capacity to heal them.

Coproduced by Inkonst and Weld / Residence support by MARC and Skogen / with the support of Kulturrådet, Malmö Stad and Region Skåne


Frédéric Gies is a dancer and choreographer based in Sweden. Oscillating between clockwork composition and the intensive chaos generated by dancing bodies surrendering to the desires and forces that traverse them, Frédéric Gies’ pieces bring the capacity of dance to speak without having to demonstrate or represent. Drawing from their former training in ballet, encounters with specific trends of contemporary dance during the 90s, dance floor experiences in techno clubs and raves and their study of somatic practices, Frédéric Gies approach form as possibilities rather than constraints. Their work addresses politics in a non-representational way, bodies as the instigators of movement don’t reinforce identities but excavate layers of complexity. Frédéric Gies’ work is also tightly connected to techno music. They have developed the practice Technosomatics, which proposes a somatic approach of club dance.

Frédéric Gies has been working as a choreographer since 1996, first based in France then Germany and in recent years; Sweden. Their work is presented both locally, nationally and internationally in traditional stage rooms, as well as in clubs, music festivals and museums.
Work that has been shown in 19 different countries throughout their career that started off in France during the early 90’s. They then danced for choreographers such as Daniel Larrieu, Olivia Grandville, Jean-François Duroure, Odile Duboc, Bernard Glandier and Christophe Haleb. It was also in France that Gies began developing their own choreographic works, first in collaboration with others and then as a sole creator. Since then they have throughout their career created choreographed work for others, amongst Weld and DDSKS. In addition, Gies have as well danced in pieces by e.g. Cristina Caprioli, Jefta van Dinther, Alice Chauchat, Isabelle Schad and Antonija Livingstone. Most recently, during 2021, they’ve been working on an original piece for Corpus.