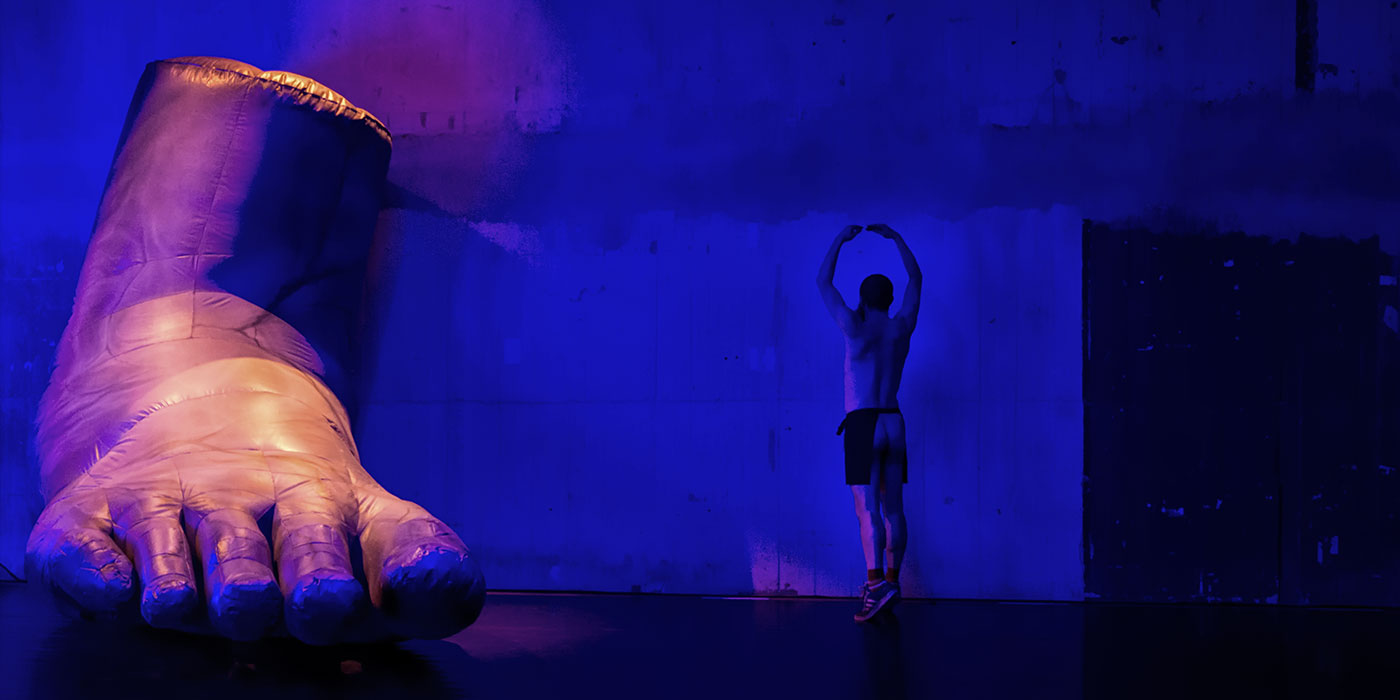 Seven hour long club performance that’s not at all a performance. But definitely a club.

Dance Is Ancient is a seven hour long event, hosted by the dancer Frédéric Gies and infused with techno music, with Fiedel behind the turntables. With a totemic sculpture by Anton Stoianov and lighting design by Thomas Zamolo, they transform the dance floor into a ritual space in which the audience is invited to dive into the bodily, sensual, emotional, social and spiritual dimensions of the act of dancing. Evoking faunlike, panic figures, summoning up the ghosts of other dancers and unleashing the fathomless and primal forces that traverse dancing bodies, Frédéric Gies’ dance acts as a catalyst for the participants experience and dance. While Fiedel’s techno set takes the audience on a journey through intense landscapes, Dance Is Ancient brings clubbing to another level, shifting the focus back to the dance floor and to the magical powers of dance. It opens a space for a multiplicity of movements yet to be written and un-written.

Frédéric Gies (SE) is a dancer based in Sweden. His latest works are tightly connected to techno music and to his club and rave experiences. For all of them, he collaborates with the dj Fiedel (Berghain/Ostgut Ton) as well as with the visual artist Anton Stoianov and the lighting designer Thomas Zamolo. The dances he creates collapse in various ways the hierarchies and distinctions between erudite and popular dance forms and evoke the bodily, sensual, emotional and spiritual dimensions of the act of dancing. Together with his collaborators, he proposes durational performances and events that create a space in between the dance floor and the stage and that are conceived as social gatherings with techno music and dance at their center.

Fiedel’s (DE) first DJ gigs in Berlin can be traced back to the early 90s, soon after the Wall fell. He started spinning records at Subversiv’s weekly Monday events. MMM, a collaboration with his friend Errorsmith, was initiated shortly after he moved to Berlin. Later on, he also worked at the record store Hard Wax to which he is still connected, having been in charge of the Killasan sound system since 2001. Fiedel’s residency at OstGut began in 2000 and was carried on to his current home base – Berghain. Some see the world as a mere chaos of antagonistic shapes and concepts, but that is not how Fiedel views things. He is prone to seeing rather connections than divisions and finding space for new opportunities where others perceive but emptiness. Mixing styles and moods without losing the storyline is what makes out Fiedel’s characteristic sound.

Anton Stoianov (DE) is a visual artist based in Berlin. He studied at Universitåt für Angewandte Kunst in Vienna and at Universität der Künste (UdK) in Berlin. His work is presented at the gallery Xavierlaboulbenne in Berlin where he had several solo shows. Anton Stoianov expands literal notions of contemporary palladiums and relics, with a quasi-animist perspective on objects.

Thomas Zamolo (SE) is a lighting designer, photographer and rehearsal director. He is a former dancer in dance companies such as the Gothenburg Opera, Pretty Ugly Dance Company and Cullberg Ballet. His work as a rehearsal director and assistant led him to work with Wim Wandekeybus, Jefta van Dinther and Tilman O’Donnell, amongst others. He develops lighting design and scenography for the stage and for installations in galleries, collaborating with choreographers such as Anna Pehrsson and Frédéric Gies.