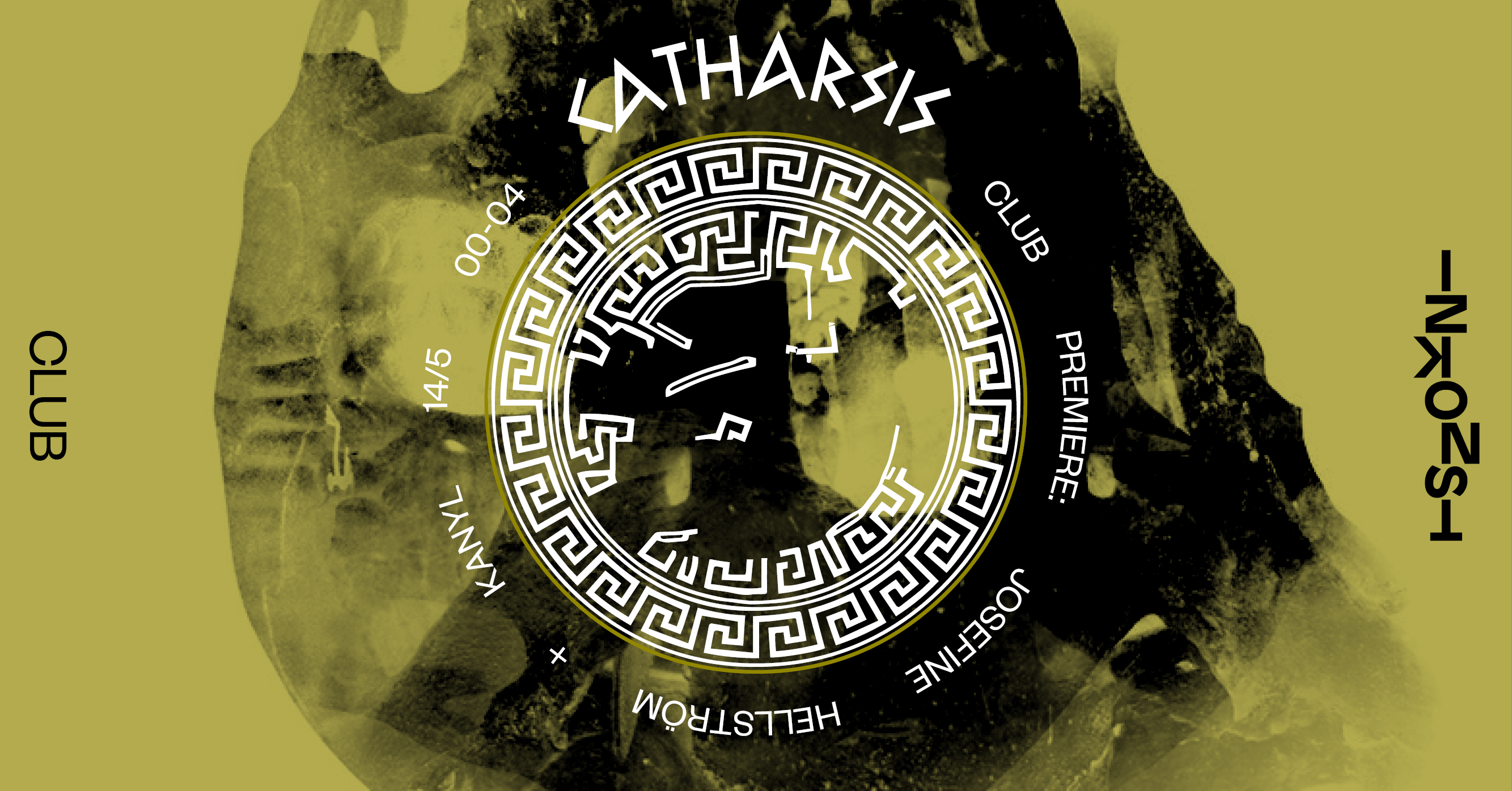 Welcome to the premiere of Catharsis; a club night dedicated to emotional climax through techno, curated by Josefine Hellström.

Catharsis (from Greek κάθαρσις, katharsis, meaning “purification” or “cleansing” or “clarification”) is purgation of emotions through dramatic art, or any extreme emotional state that results in renewal and restoration. As a metaphor it was originally used by Aristotle in the Poetics, comparing the effects of tragedy on the mind of a spectator to the effect of catharsis on the body. In psychology, the term is associated with Freudian psychoanalysis and specifically relates to the expression of buried trauma, bringing it into consciousness and thereby releasing it permanently. Social catharsis may be regarded as the collective expression of extreme emotion.
With focus on high quality, heavy techno and rave culture, Catharsis honors nostalgia and celebrates decadence, liberation and energy in its highest form. Characterized by emotive melodies and hard-hitting drums, the duality of euphoria and melancholy defines the storytelling of Catharsis. It’s a peak time, cutting edge sugar rush designed for dancefloors.

Josefine Hellström (Catharsis / Alleycat Anthem / Klubb Döden)
It’s the contrasts that get you. Sharp edges soft to the touch, like translucent lace on sun-cracked asphalt. Moving through an intoxicating, unpredictable array of rough breakbeats – it is the raw tonality and temperament that makes Josefine a fearsome reputation as a selector. Straight to the point with elements of colorful melodies, reflected through infectious tribal-esque rhythms and rugged cut UK bass – is what appears throughout her music and in her sets. This techno is a powerful intent to build tension, climaxing into a frenzy of emotions, and also the reason why Josefine is one of the most sought-after DJs in the Scandinavian region.
https://soundcloud.com/josefinehellstrom

Kanyl (Klubb Döden)
This techno veteran has been a part of the region for 20 years, working his magic on both sides of the booth. Resident DJ at Inkonst and part of Klubb Döden, Kanyl embraces eccentricity and sonic chaos, while operating his craft with utmost tenderness. To him it’s all about exploring and reinventing, merging pieces together and creating something new; something entirely his own. With a deep knowledge and understanding for music, he embodies the peculiar and unconventional sides of it, catering a full body experience where no one is left untouched or indifferent. His sets are kinetic and edgy rides that keep you on your toes, filled with unique textures and unexpected turns, yet tinged with a dazzling clarity of pieces that speak together.
https://soundcloud.com/kanyl