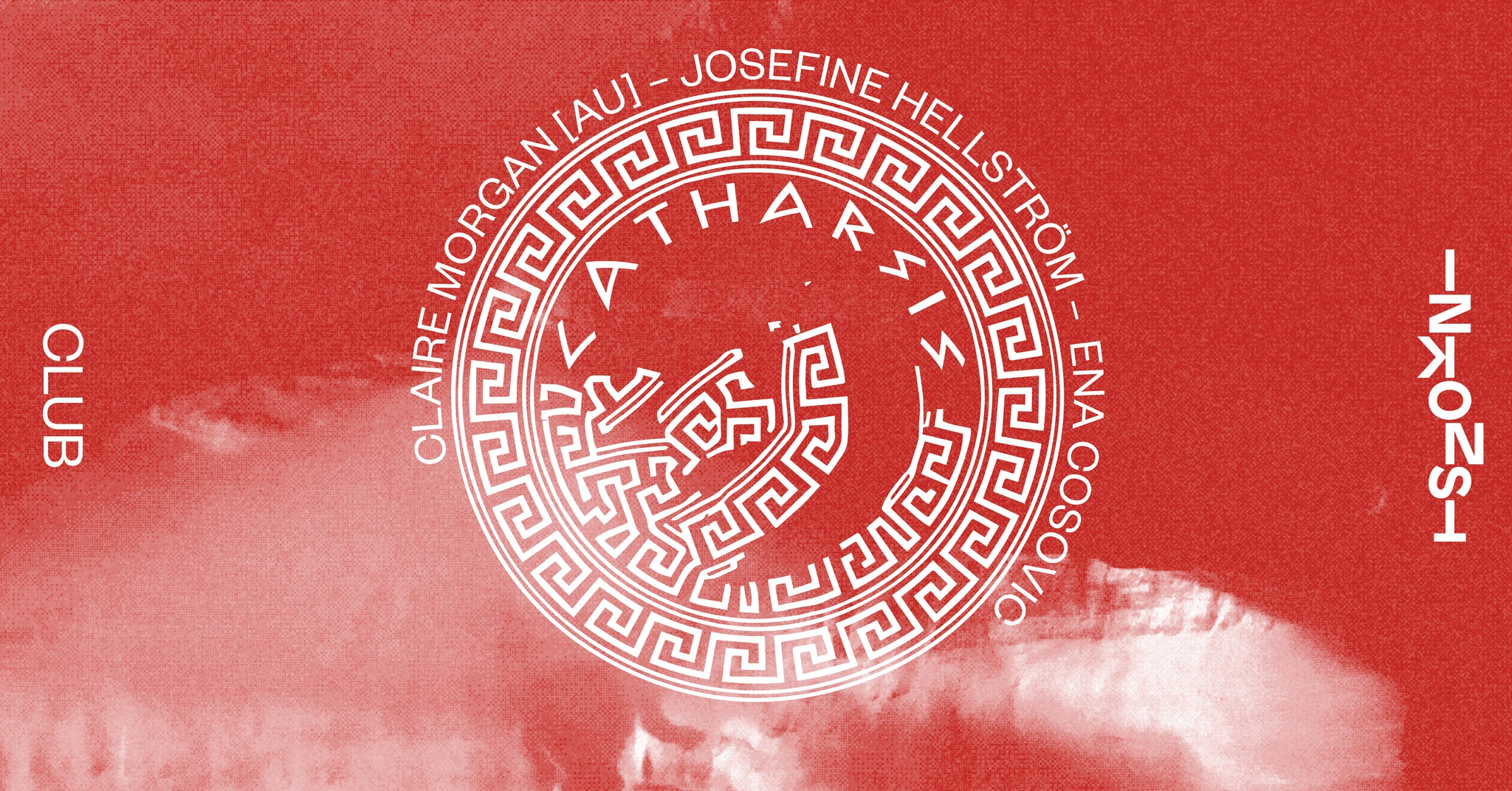 Welcome to the next edition of Catharsis; a club night dedicated to emotional climax through techno, curated by Josefine Hellström.

Proudly presenting Berlin based Australian Claire Morgan and Copenhagen’s Ena Cosovic.
Catharsis (from Greek κάθαρσις, katharsis, meaning “purification” or “cleansing” or “clarification”) is purgation of emotions through dramatic art, or any extreme emotional state that results in renewal and restoration. As a metaphor it was originally used by Aristotle in the Poetics, comparing the effects of tragedy on the mind of a spectator to the effect of catharsis on the body. In psychology, the term is associated with Freudian psychoanalysis and specifically relates to the expression of buried trauma, bringing it into consciousness and thereby releasing it permanently. Social catharsis may be regarded as the collective expression of extreme emotion.
With focus on high quality, heavy techno and rave culture, Catharsis honors nostalgia and celebrates decadence, liberation and energy in its highest form. Characterized by emotive melodies and hard-hitting drums, the duality of euphoria and melancholy defines the storytelling of Catharsis. It’s a peak time, cutting edge sugar rush designed for dancefloors.

CLAIRE MORGAN (Haul Music, AU)
Claire Morgan inhabits a unique and refreshingly dynamic space in the music world. Extraordinary range, taste and skill shine in a myriad of DJ settings, from laying down electro and booty at Berlin’s renowned underground fetish parties to ambient odysseys in cathedrals, to ten hour sets at the other cathedral, Berghain, armed with the full spectrum of colourful and adventurous techno.
Her skills were honed in Australia, but it’s in the techno capital that her formidable style and sharp instincts have come into their own. Shifting gears effortlessly between techno, acid, trance, breakbeat and classic rave, Claire delivers a fluid, fierce and stomping dancefloor experience that forges a soulful connection between genres and creates a journey that is complex, intelligent and deeply cathartic.

ENA COSOVIC (Night Tide/DRED Records, DK)
Ena Cosovic is one of Copenhagen’s leading selectors, being a Culture Box resident for over seven years. She has mastered the ability of enslaving the minds and bodies of thousands of dancers in clubs all over Europe with her ”emotional body music” – an unpolished mix of rugged dub techno, raw acid and rusty breaks.
Famous occultist Aleister Crowley once said: ”The Way of Mastery is to break all the rules — but you have to know them perfectly before you can do this; otherwise you are not in a position to transcend them.” Copenhagen based producer and DJ Ena Cosovic has worked her way up to that very position. There’s an unmistakable Detroit flavour to everything she dishes out; a sense of deep understanding of composition and lineage. Ena knows the techno tradition by heart. That’s why she’s able to transform it.

JOSEFINE HELLSTRÖM (Catharsis/Alleycat Anthem/Klubb Döden, SE)
It’s the contrasts that get you. Sharp edges soft to the touch, like translucent lace on sun-cracked asphalt. Moving through an intoxicating, unpredictable array of rough breakbeats – it is the raw tonality and temperament that makes Josefine a fearsome reputation as a selector. Straight to the point with elements of colorful melodies, reflected through infectious tribal-esque rhythms and rugged cut UK bass – is what appears throughout her music and in her sets. This techno is a powerful intent to build tension, climaxing into a frenzy of emotions, and also the reason why Josefine is one of the most sought-after DJs in the Scandinavian region.