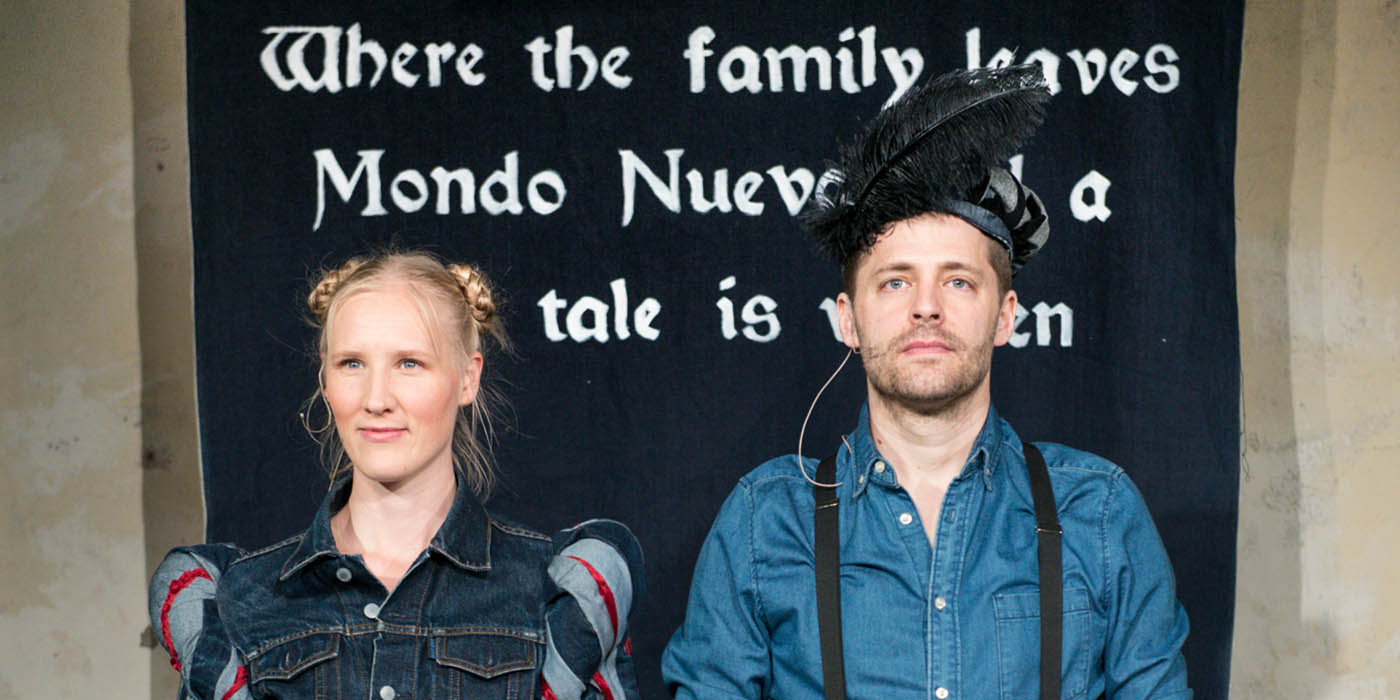 A performance concert about the new Europeans

A performance concert by the Liebmann-Schmidt family about the new europeans, real meetings, stories and songs shared by travellers from the north and south.

A Swiss-Danish family travels to Sicily. They visit a house in the Sicilian mountains called Mondo Nuevo. This is the provisional home of nine Nigerian men, who are recovering from a boat trip and waiting for further travel documents. The north-European guests and the inhabitants of Mondo Nuevo exchange songs for songs, stories for stories and establish temporary friendship. Time is killed with ping-pong, the blonde child plays with a flip flop.

Exodus is a performance concert by and with family Liebmann-Schmidt. Their tale of the new Europeans deals with concrete encounters, and stories and songs exchanged between travellers from North and South, yet composes these elements into a fiction that reaches far beyond documentary. Inspired by medieval tradition, the tale is sung on the melody of the Danish ballad Kongebørnene, and refers to a valley on the other side of the mountains – a place so far away that the audience has to trust what they are told.

EXODUS opened inDecember 2015 at Sophiensæle in Berlin as a part of the Nordwind Festival.

Cecilie Ullerup Schmidt (DK) is working as a performance artist in Scandinavia, Germany and Switzerland, and curates the festival WORKS AT WORK. From 2011 to 2015 she was artistic research associate teaching at the BA “Dance, Context, Choreography” at Inter-University of Dance in Berlin and from 2016 she is writing a Ph.D in the Dept. Arts and Cultural Studies at Copenhagen University. With Lucie Tuma she holds the duo Chuck Morris.

Andreas Liebmann (SZ) is working in the field of site-specific performance and theatre, integrating impulses from natural science, personal encounters, anthropology and politics. His works are presented in a.o. Switzerland, Germany, Denmark, Bolivia. As an author he has been writing radio plays as well as texts for for Theatre Freiburg, HAU Berlin, Burgtheater Vienna and Schauspielhaus Zürich. From 2015 he’s been teaching concept based directing at the Danish National School of Performing Arts in Copenhagen.
Andreas’ website