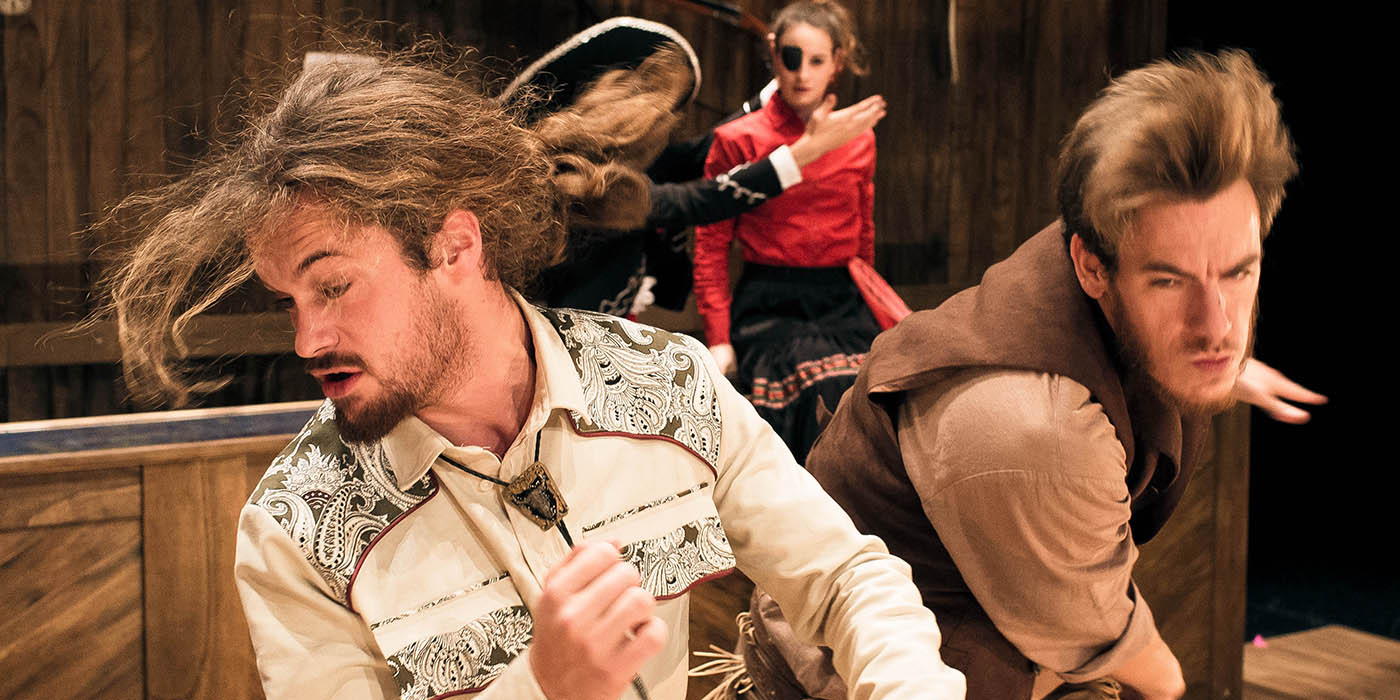 An insane spaghetti western cooked up by an international superteam of north american theatre vandals and slovenian dancers, that is the first time the legendary Nature Theater of Oklahoma performs in Malmö.

Pursuit of happiness is one of the rights guaranteed in the US constitution – along with the seemingly incongruous right to bear arms. With the famous phrase, “Life, liberty and the pursuit of Happiness”, the United States Declaration of Independence places pursuit of happiness among the “unalienable rights” – which the Declaration says have been given to all human beings by their Creator, which governments have been tasked to protect.

But what is Happiness? Into what dark corner do we individually and collectively chase it? To what wild and further frontiers will we pursue it? And to what unseemly Hollywood blockbuster end?

In Pursuit of Happiness, Nature Theater of Oklahoma work for the first time with the Slovenian dance company EnKnap Group to take on the myth and legacy of the American Dream and its aspirational aftermath.

PRE PARTY Saturday 16th at 6 pm
Before the Swedish premiere we put on a little party and mingle. We have invited the musician Max Tellving who plays American folk music on stage, our DJ Rickard Grönkvist spins some nice records before and after the show, the bar has prepared some cold, American Happiness IPA and bourbon and our foyer is full of people who yearn for some bar fights, gun shots and Slovenian cowboys in impossible poses.

Nature Theater of Oklahoma is an award-winning New York art and performance group under the direction of Pavol Liska and Kelly Copper. Since Poetics: a ballet brut, our first dance piece created as an ensemble, Nature Theater of Oklahoma has been devoted to making the work we don’t know how to make, putting ourselves in impossible situations, and working from out of our own ignorance and unease.  We strive to create an unsettling live situation that demands total presence from everyone in the room. We use the readymade material around us, found space, overheard speech, and observed gesture, and through extreme formal manipulation, and superhuman effort, we affect in our work a shift in the perception of everyday reality that extends beyond the site of performance and into the world in which we live.

EN-KNAP is an international dance group that was founded in 1993 by Iztok Kovač in Leuven, Belgium, under the wings of the production-management house Stuc and the Klapstuk Festival. A year later the group moved its headquarters to Ljubljana, where it established EN-KNAP Productions. The internationally renowned production company has introduced and established its trademark aesthetics inside the European space, attracting an array of acclaimed international co-producers. From its beginnings, the programme of EN-KNAP has been supported by over 50 international co-producers, by the Slovenian Ministry of Culture and by the City of Ljubljana. Since 2009, EN-KNAP administers Španski Borci Cultural Centre, a public infrastructure in the capital of Slovenia, Ljubljana with the domestic stage for the only professional ensemble for contemporary dance in Slovenia, EN-KNAP Group.