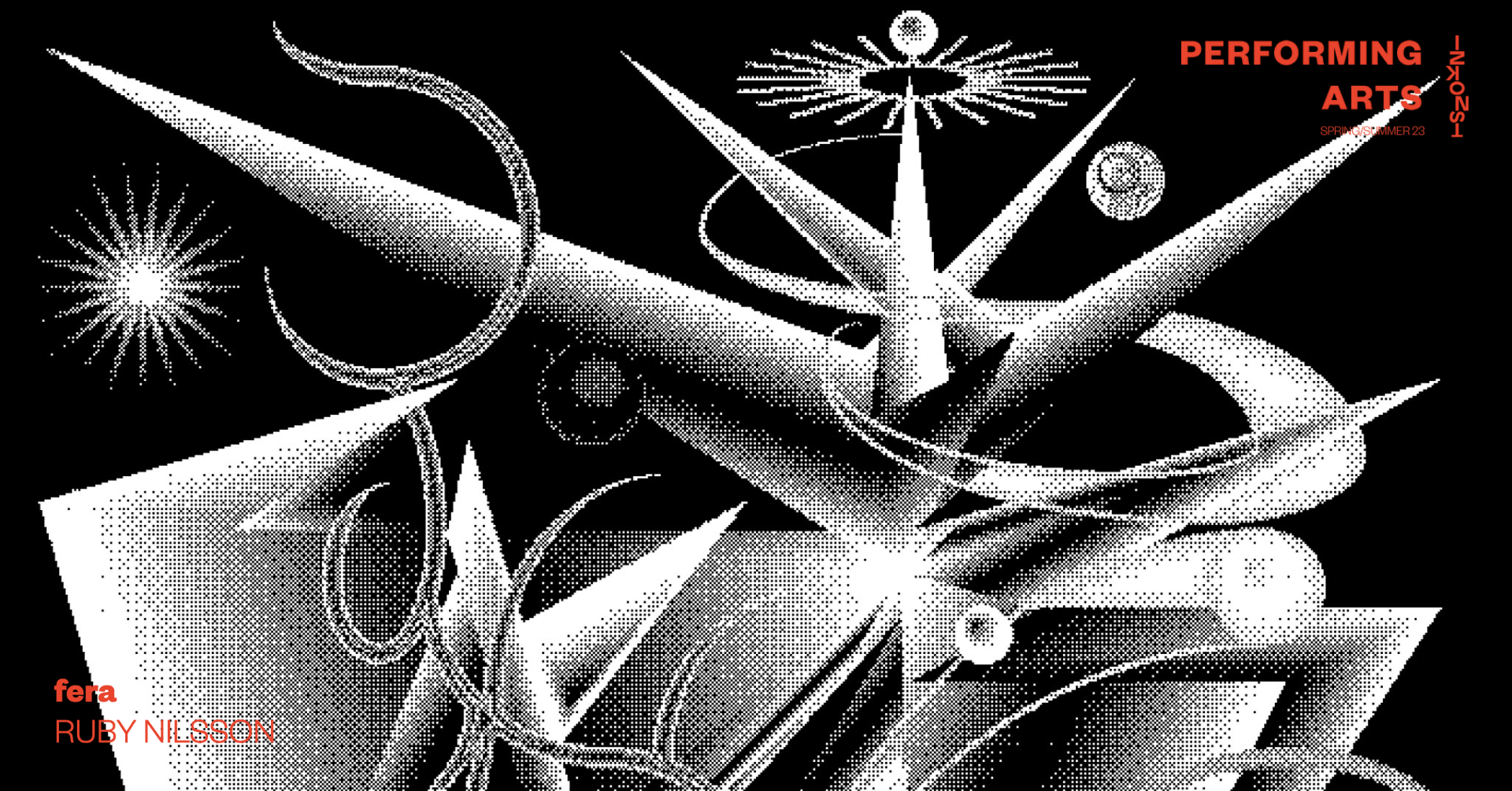 fera is what the Devil is to God: necessary and always present in the form of threat, terror and darkness.

fera, from Latin fera, wild animal, beast
fera, from Italian feriō, to injure
fera takes place at an unseen place
fera is what Orpheus and Eurydice isn’t
fera is Phaedra without D
fera is détournement

fera is black-box specific, that is, it’s devoid of spatial specificity
but still fera has three spaces
exterior
interior
and the passage between them

fera is dysphoria, simply and plainly put
fera is the world in becomi
ng-unbearable
fera is to some extent always impossible

fera is a new work by Ruby Nilsson and is made together with Ba Bladh, Andria Nyberg Forshage, Maja Lindström and
Em Silén.

Ruby Nilsson is a dramatist, writer and artist working in Malmö, Copenhagen and Stockholm.She is educated at the Royal Danish Art Academy and University of Södertörn. Her work circles around the relationship between bodies and technologies of writing, often with a focus on feminist forms and processes of becoming. Ruby is the project’s instigator and has invited and shaped the performance artistic team in accordance to their artistic practices andhow they relate to the project’s concept.

Ba Bladh is based in Copenhagen and educated at the Royal Danish Art Academy. Their artistic practice focuses on “queer” binary structures and breaking up linear time through Their performances. With a background in international politics They mix theory with fiction in the creation of installations and performances.

Andria Nyberg Forshage is a writer, curator, poet and independent scientist with an MA in Aesthetic from Södertörns högskola. She is a member of the editorial team for Paletten, a journal for contemporary art and also publishes essays, theory, poetry and experimental text in connection to Paletten, Lulujournalen, Kontext Press, Datableed Magazine, Galleri Andréhn-Schiptjenko, Two Thirds North, Ett lysande namn etc.

Maja Lindström is lightdesigner and one of three artistic leaders for Institutet in Vitsaniemi. She grew up in Luleå, but has lived and worked in Malmö för several years and is now based in Stockholm and Tornedalen. She is educated at Stockholm University of The Arts and Malmö University and has worked with performing arts and light in theater, dance, performances amongst other things.

Em Silén is a composer, instrumentalist/singer, producer, dj, sound technician, artist and writer that lives and works in Stockholm. She is educated in electroacoustic composing at The Royal College of Music in Stockholm and a former member of the studio collective Drömfakulteten. At Drömfakulteten she explored electronic clubgenres, began dj:ing and started performing under the alias rip ME, under which she mostly produces, with the motto “dishonor the brand”. Em has released music under rip ME since 2017, most recent on her debutalbum Libido on the recordlabel Cease2Exist.