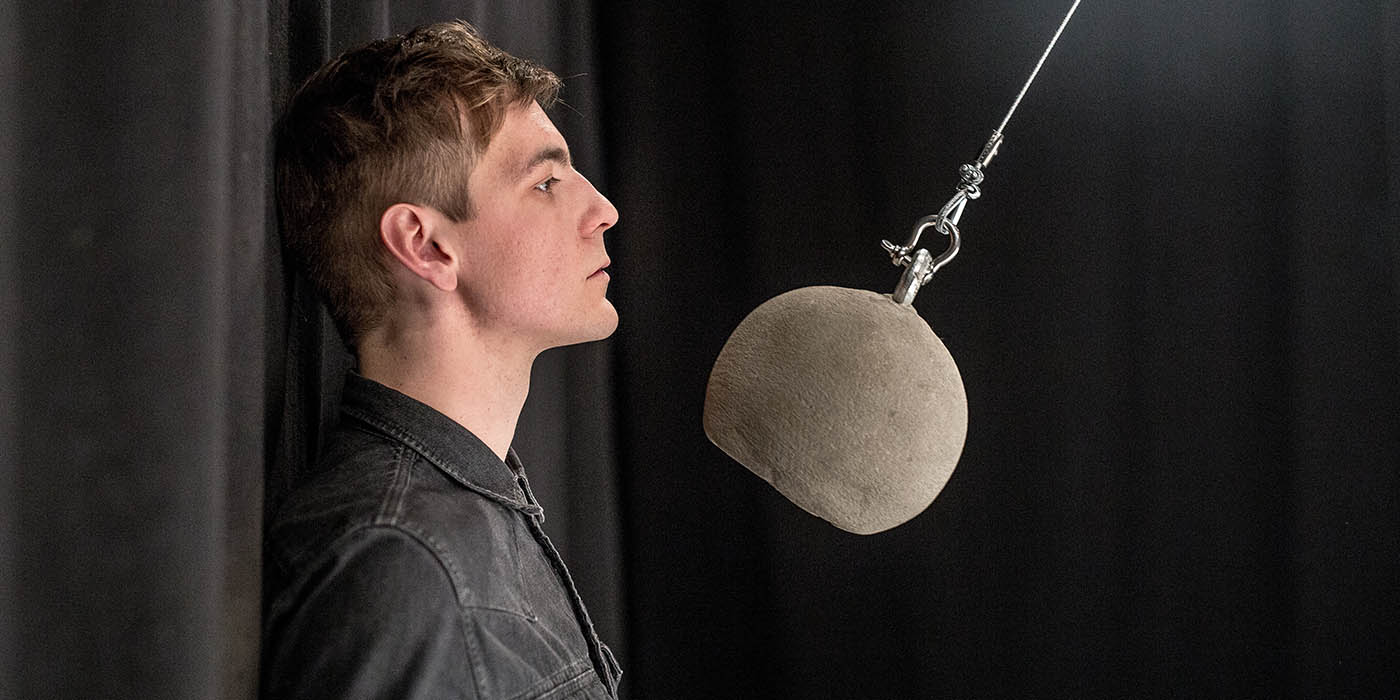 Razor-sharp acting on a journey through the human mind

Meet a montage of imaginary images and characters that blur the line between reality and fantasy in a performance that devotes itself to fantasy – our need for it and its mechanics.

To fantasize is a technical ability beyond good and evil. It is the setting for our desire and a necessary tool for us to become, what we call, whole subjects. At the same time the basis of any revolutionary potential and the foundation of racist prejudice. In the thinking of this piece, the phantasmatic is far most a defence mechanism enabling us to comprehend with the inconsistencies of the world.

The theatre is an empty space, just a silent framework in which we situate our pieces. It is that emptiness which allows us to put the laws of geography and time aside and travel anywhere at anytime. This nothingness is not only presupposed by us the audience; it is also, often, celebrated by us the makers. In “Physics and Phantasma” though, it is perceived as something deeply traumatic – a void that has to be filled, with anything(!) other than nothing, covered in a veil of fantasy. The piece intends to become that veil, to study its creation and how it is being put into play in-between the audience and performer.

Fantasizing is a language practice. Thus, Iggy Lond Malmborg invites to a piece fully consisting of words (or the possible lack of them). With this new solo he explores a toned-down and less explanatory style than in the earlier works. The result is a piece that mainly takes place within the audience imagination, through affirmation of- or resistance against suggested motives; a phantasmatic imagery ranging from the most arbitrary kind to the darkest places of human imagination.

Iggy Lond Malmborg (SE) is a freelance actor and performance maker based in Malmö, Sweden. Though a formation in traditional acting (the Theatre academy of Malmö 06-10) his pieces span over a wide range of aesthetics and styles, both solo and collaborative work. His main artistic interest is to use the performance event as a model onto which the pieces discourse directly can be applied. By using strategies that can be compared to minimalism, he sheds light on the politics of theatre and read it as a hierarchical machine with (unconscious) patterns of inclusion and exclusion. Since 2009 he is collaborating together with Johannes Schmit (DE) under the name White on White. The duo runs a performance series – until today including 6 autonomous works. The aim of the series is to turn the theoretical achievements of the so called critical whiteness studies into productive aesthetics for stage. In 2014 his last solo work b o n e r premiered at the Baltic Circle Festival in Helsinki, the piece has toured actively since to festivals such as Spielart (Münich), Auawirleben (Bern) and Oslo international theatre festival. During 2015 he premiered 99 Words for Void, a duo performance with Maike Lond Malmborg. The piece has so far been presented in festivals as Auawirleben (Bern), Le FAB (Bordeaux), Baltoscandal (Rakvere) and Bastard (Trondheim). Both b o n e r and 99 Words for Void continues to tour during 2017.

18 year limit?
The performance contains explicit language that can be perceived as offensive and is not suitable for minors under the age of 18.