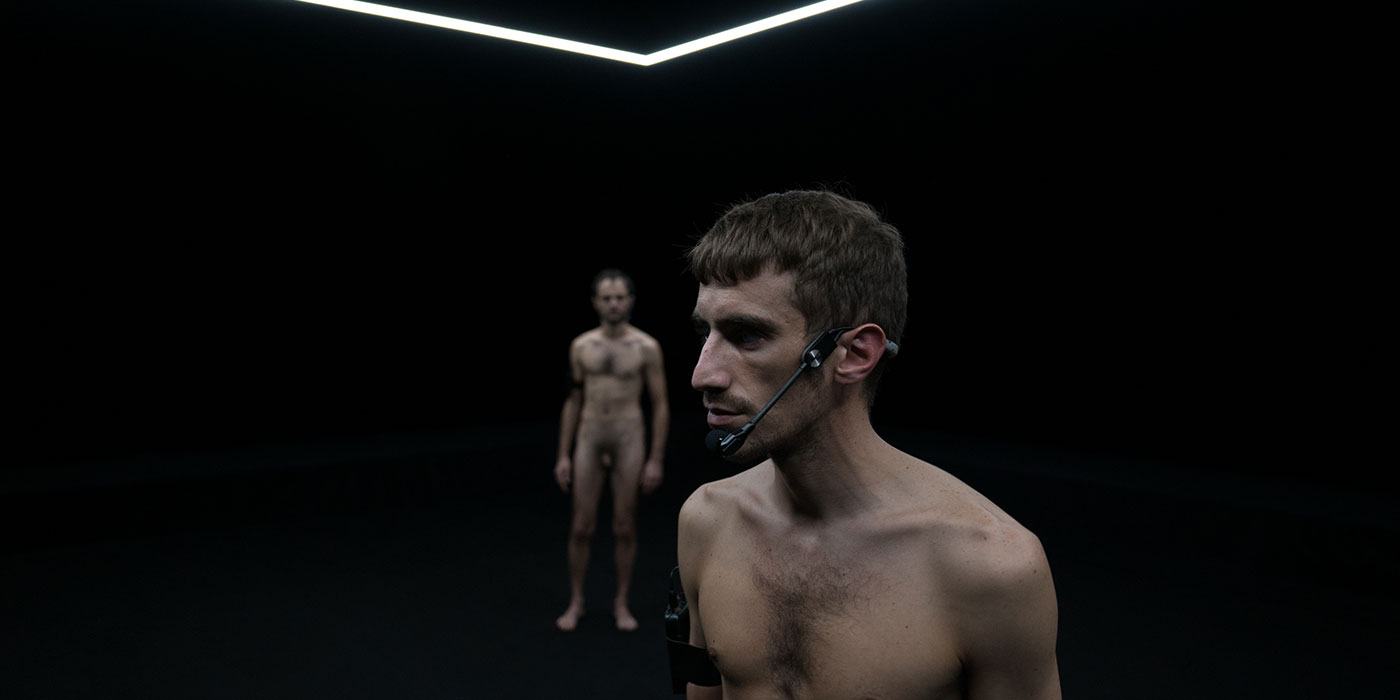 Come close to the body in vulnerable and intimate duet where the dancers use blood as a point of departure for stories about life and technology.

Dark Field Analysis calls upon the intensity of being alive by placing us humans in relation to other forms of life. In the performance, organic blends with synthetic, human with animal and material with ethereal.

A long conversation unfolds between two naked men on a carpet; the topic of blood running as a red thread throughout the performance. Dark Field Analysis draws its name from a branch of alternative medicine that uses dark field microscopy to diagnose systemic bodily conditions originating in the blood. But the conversation between the two men encompasses more than medical facts. Here, blood serves as an analogy for looking inwards and outwards: into and beyond our selves.

Jefta van Dinther (DE) is a choreographer and dancer working between Stockholm and Berlin. His work is characterized by a rigorous physical approach and always implies a staged research of movement itself. The moving body is centerfold in his work but belongs to and interacts with a body of light, sound and materials that constitute an environment of perception and sensation. The dancers work and dance their way through various environments: their processes exhibited live on stage become performances. Jefta’s works deal with notions of illusion, the visible and the invisible, synesthesia, darkness, labour, the uncanny, affect, voice and image. They often play with formats of presentation, and range from traditional dispositifs to installation like settings as well as from smaller intimate performances to large scale productions. His work includes the performances Dark Field Analysis (2017), Protagonist (2016) for Cullbergbaletten, As It Empties Out (2014), Plateau Effect (2013) for Cullbergbaletten, THIS IS CONCRETE (2012), GRIND (2011), The Blanket Dance (2011), Kneeding (2010), The Way Things Go (2009) and IT’S IN THE AIR (2008). Jefta van Dinther has also created the choreography for and dances in the music-video Monument (2015) by Robyn &amp; Röyksopp and has also organised and curated the festival LIAISON (2015) in Stockholm.

“NATIONALES PERFORMANCE NETZ (NPN) Coproduction Fund for Dance, which is funded by the Federal Government Commissioner for Culture and the Media on the basis of a decision by the German Bundestag”

Dark Field Analysis is a production by Jefta van Dinther