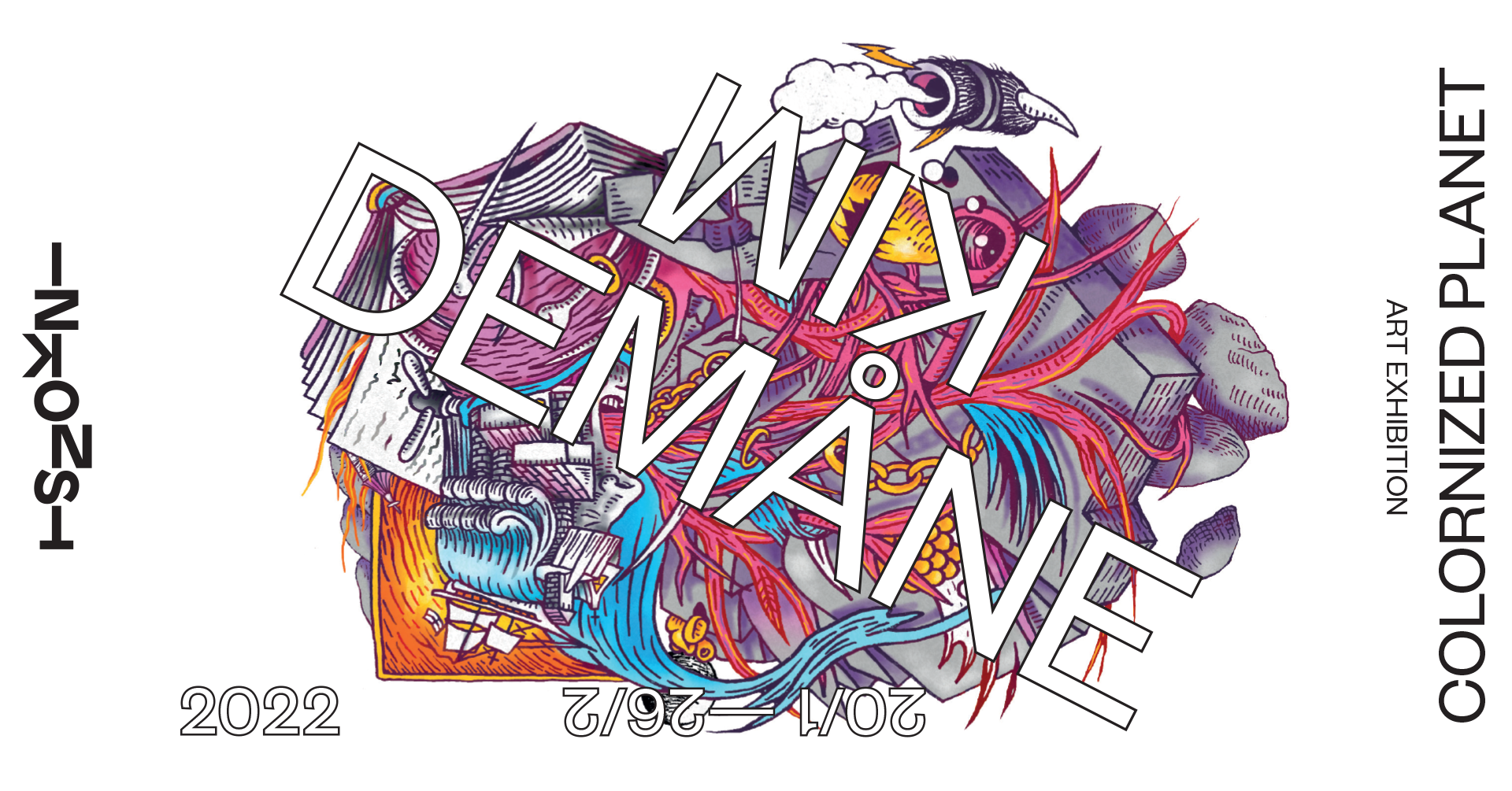 A world in charcoal has emerged on Inkonst’s walls.

Kim Demåne has created a completely new work directly on Inkonst’s walls. Inspired by a trip to Togo and a woman he met there who produces charcoal, he creates a new expression for himself where the black coal carries the story of colonization, human strength, the power of nature to strike back and a crazy but amazing world.

In the exhibition “Colornized Planet”, Kim Demåne tackles Inkonst’s walls with charcoal, instead of color and spray cans, and works in a completely new intuitive way where he challenges his own ideas about his creation process. Where he previously planned all the paintings in detail, here his imagination and hand are guides on the road to the motif and lets the story play the lead role.

The exhibition consists of three central motifs, one of which is drawn live during the opening. The large motif carries many narratives from Togo, but also typical symbols that Kim uses to talk about colonization and oppression. In the second motif, which also includes an animation, we have ended up in the middle of the Swedish forest, which have now become a clear-felled area, where the chainsaw goes on and on until there is no nature left. But suddenly it catches fire and out of the ashes a new world takes shape. There is a vivid symbolism of fire and coal as an eternal force and cycle of nature.

Drawing inspiration from cartoon geniuses such as Per Åhlin and Jan Lööf, as well as anime and manga, or Iron Maiden’s Killers covers and old skate illustrations, Kim Demåne creates a completely unique world of images where imagination flows freely. There’s also a recurring social critique of a world in imbalance with itself, where man pillages the planet. But there’s always a hope, a budding spark or a helping hand.

Kim often uses a mixture of fantasy and everyday life as a starting point in his pictures, where history and the future meet in a doomsday vision of sorts. A painting can be based on grandma’s sleepy old workers’ community in Småland, taken into the future where grandma has become a cyborg scurrying the fields looking for a gap into… another world perhaps.

Kim Demåne aka Delicious Brains was born in Ronneby but has been active in Malmö for many years. His artistic expression is colorful, imaginative and spans many techniques such as mural painting, drawing, animation and sculpture. He also has a background in graphic design. Kim’s art is clearly visible on the streets of Malmö and he also works continuously both throughout Sweden and internationally. In the past year, he has had major design assignments in Gothenburg, Kristianstad, a mural for Artscape in Sofielund, Malmö and made a solo exhibition at Ronneby Art Gallery. Kim is also a part of Stewdio Seved.

The exhibition can be seen at all Inkonst’s events, for example on our Friday and Saturday Bar Nights 19.00–23.00 always with free entrance.