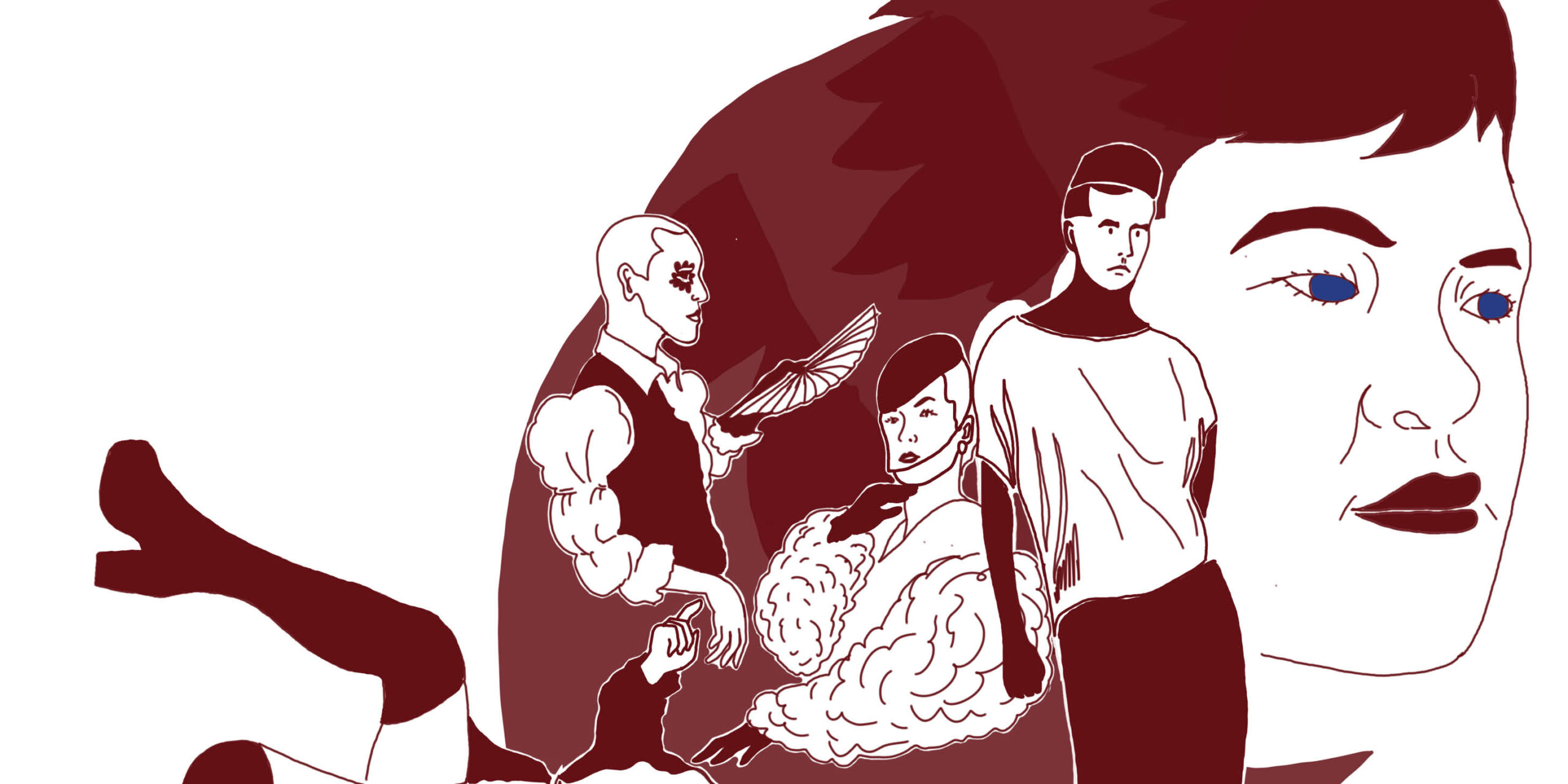 Whacking/punking in a world of delicious movement

Due to the new restrictions this event is unfortunately cancelled. If you have bought tickets you will receive a refund automatically.
Keep an eye out for a new chans to see The Lobby “Room 02:53”

Room 02:53 is a Punking/Whacking dance performance that sings-along off-key and celebrates the beauty of failed communication. With the style’s unique take on storytelling and theatrics, five dancers commit to the vulnerability of communicating our emotions.
Amplified gestures and sharp movements give Room 2:53 its charm. Join a surreal, mouth-watering and visual experience, that encourages you to get caught under its spell and to bask in the chaos.

Punking/whacking is a social dance-style originally created by the queer people of colour of the 1970’s Los Angeles. The style combines expressions from silent films, cartoons and cinema within the context of the underground club scene. It is a dance language designed for reclaiming dignity from an oppressive society.

Lauri Lohi is a clown, performer and visual artist hailing from Finland and based between Gothenburg, Sweden and Berlin, Germany. They are an autodidact contemporary dancer with their movement background in the dance styles House, Popping, Locking, Breaking and Hiphop, which they studied at Åsa Folkhögskola between years 2014-2016.
Lauri started learning Whacking on their own from videos in 2014 and has since explored the style in battles, video art, jams and performances. They have studied mime acting and physical theatre both in Stockholms Dramatiska Högskola and with various mentors in Berlin. Since 2017 Lauri has choreographed and performed their own pieces and has worked with and for dancers and groups such as Heidi Vierthaler, JUCK, Rawmantics and Slip of the Lip.
Lauri enjoys being upside-down.

Marvil Iglesias is a Stockholm-based dancer Specializing in funk and house dance styles. Hailing from the realm of ASMR, horror flicks and ruthless comedy. Marvil infuses his broad dance expression with that of humour and horror storytelling.
Marvil is a known dancer in Stockholm’s streetdance scene and besides dancing has also excelled as an MC in the Scandinavian ballroom-scene. He is a member in a Stockholm-based comedy improv-collective Improphilia and currently works at various schools, organisations and events

Ranya Asadi is a a dancer from Malmö with over 15 years of experience in dancing and teaching. After an introduction to the dance style Whacking in 2013, she got stuck immediately but did not start practicing the style properly until after a trip to South Korea in 2014. She has taught, freelanced and traveled around the world to compete in Street Styles, Voguing and Whacking. Besides dancing, Ranya is also a DJ and organizer and is an active member of the Scandinavian ballroom-scene as well as a leading figure of the Malmö Ballroom community.

Jérémy Gaudibert is a mover and a maker. He’s a waacking dancer and teacher. He’s also a member of the finnish chapter of the House of Ninja representing the Old Way Voguing. In addition to developing these two techniques he, together with the French collective Petit Huit, explores new forms of dance theater and immersive performance.
Jérémy discovered dance in his teenage years through the funk styles of Popping and Locking as well as Hype dance, name given in France to the early 90’s Hip Hop dance. While studying and later on working as a designer and maker, he approached Whacking (in 2014) and the Ballroom community (in 2015) where he found the appropriate vocabulary to shape and communicate his emotions.
Through both bodily experiences and physical constructions, Jérémy works at proposing a different experience of the world.

Hanne Os Wold has her education from Flow Dance Academy in Copenhagen and Åsa folkhögskola in Sweden and is specialized within urban dance styles.
She learned her first whacking move over 10 years ago and hasn’t stopped since – today she spreads the gospel of whacking through shows, choreography, teaching and by participating in battles. In 2016 she co-founded «GlitterFitter» – a show group focusing on dance, humour and entertainment.
The last couple of years Hanne has also used her urban dance background within a contemporary framework and enjoys using her movement language freely to convey characters, stories and emotions.

We follow the guidelines and restrictions provided by the Public Health Authority to ensure a safe environment at our events.