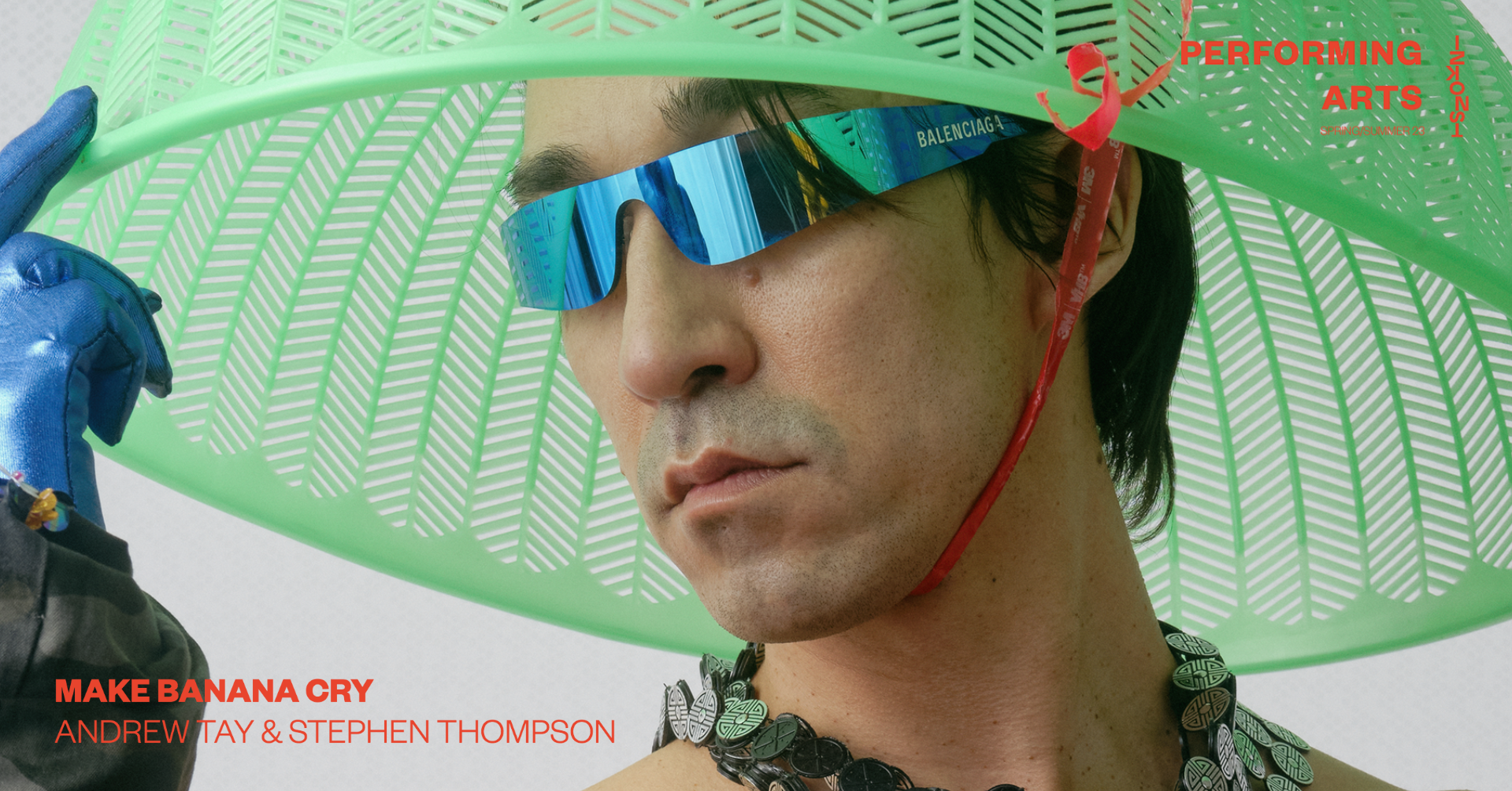 6 artists confront western society’s perception of “Asian ness” in a critical and theatrical performance that reclaims, protests against and subverts clichés.

Sitting in the tension between identity and stereotypes, the performers continuously deconstruct cultural codes using an arsenal of randomly selected objects in an attempt to shake off the weight of violent representation and fetishization.

Make Banana Cry is a continuous barrage of body politics, a durational parade which contemplates the problematics of “universal” western popular culture while drawing on the artistic background of each of the invited artists. Visual artist Dominique Petrin creates an immersive fake museum “exhibition” as the container for the work, encouraging the public to consider the history of colonization within cultural institutions and museums.

“Make Banana Cry reminds us that we are both products and producers of the society we live in, carriers and transmitters of cultural identities. And that unlike the stereotypes we are bombarded with every day, contemporary identities are never fixed, never frozen and never one-dimensional.” -The Dance Current

Andrew Tay is a hybrid performer, choreographer, curator and DJ. He is the cofounder of Wants&Needs Danse with Sasha Kleinplatz. Together, they produce the popular dance events Short&Sweet and Piss in the Pool which take place in non-traditional venues in Montreal. Tay received the Buddies in Bad Times Vanguard Award for Risk and Innovation at the SummerWorks Performance Festival for his work Fame Prayer / EATING (2016). He was named the first artistic curator at Le Centre de Création O Vertigo (CCOV) in Montreal and recently became the Artistic Director of Toronto Dance Theatre (TDT) one of Canada’s oldest contemporary dance companies. Tay actively thinks about community, irreverence and resistance in both his performance and curatorial practices.

Stephen Thompson, originally from Calgary, Alberta is an inter-disciplinary artist working between Canada, USA and Europe. Stephen’s introduction to movement and performing was through competitive figure skating. He received a Bachelor of Kinesiology (art and science of movement) and Dance from the University of Calgary. In 2015 at the World “Figure” Championships in Lake Placid, Stephen received the bronze medal. In 2016 he received a Victor Martin-Lynch award from the Canada Council for the Arts. Past choreographic work and collaborations: 2012 Bessie award winning Antigone Sr. (Large), The Ghost of Montpellier and the Samurai (2014) with Trajal Harell, Culture Administration & Trembling (2014), Les Etudes (2017), Chaud (2020); Jennifer Lacey, Antonija Livingstone, Dominique Pétrin, whatwearesaying (2014); Public Recordings (2 Dora Mavor awards Toronto), numerous projects with Benoit Lachambre, Relative Collider (2015); Liz Santoro and Pierre Godard, Service #5: Try to keep kids off naturalism and Kein Paradiso with Adam Linder recipient of the Mohn Prize at the L.A. Bienniale, Stitchomythia with Nadia Lauro and Zeena Parkins, Dramaturge for Such Sweet Thunder (2019) recipient of 8tensions Impulstanz, Compulsory Figures (2019) co-signed with French visual artist Xavier Veilhan.

Dominique Pétrin is a visual artist living and working in Montreal, Canada. She has been working primarily with silkscreen printing for over 20 years. A former member of the petrochemical rock band Les Georges Leningrad from 2000-2007, she also collaborated with renowned artists such as Sophie Calle, Pil and Galia Kollectiv and choreographers Antonija Livingstone, Stephen Thompson and Jennifer Lacey in Culture, Administration & Trembling performance. Some of her most featured works are including an installation in Banksy’s The Walled Off Hotel (2017) in Palestine, and Supernova (2013), an all-over installation on the Beaudry metro station in Montreal. Her work has also been exhibited in many artist-run centers across Canada, at the Musée d’art Contemporain de Montréal, Musée National des Beaux-Arts du Québec and have been nominated for the prestigious Sobey Art Award 2014.

Based in Montreal, Hanako Hoshimi-Caines has danced and collaborated with a great many local choreographers: Frédérick Gravel, Maria Kefirova, José Navas/ Compagnie Flak, among others. Often touring internationally, she participated in the creations of the Cullberg Ballet in Stockholm, where she performed in works by Benoit Lachambre, Deborah Hay, and the Forsythe Company. Her personal work has been presented in several European festivals, in Germany, Sweden, Bulgaria.

Francesca Chudnoff also known as Franz (she/they), is a Tkaronto based millennial, with a BFA in performance, and paying rent as a multidisciplinary artist. She is a dance maker, video artist, and photographer who is slowly learning digital illustration. Their work is in conversation with internet aesthetics and shaping a “social aura”. In process they prioritize improvisation and collaborative creation. Franz recently completed a 3 year research residency at Dancemakers Centre for Creation with Driftnote, and has worked as a mentor and dramaturge at Festival of Recorded Movement and X University.

Born in 1993 in Seoul, Sehyoung Lee lives and works in Paris. He currently studies at École nationale supérieure des beaux-arts de Paris. His work focuses on the schematization between the world and himself and also he questions the complementarity that surrounds him. He has appeared as a performer in various works including “Happening tempête” by Boris Charmatz at Grand palais in Paris (2021) and presented his creation at “Perma-” (sculpture) for group exhibition Plant B curated by Noelia Portela at jardin du directeur Beaux-arts de Paris (2021) and “(Ici)divague” (performance, sculpture and sounds) for graduation show at Beaux-arts de Paris and for group exhibition “No no fest” curated by Thomas Conchou at Maison populaire in Paris (2021).

Born in Singapore, Cynthia Koppe is a New York City based dancer and teacher. Her longest collaborations have been with Liz Santoro and Pierre Godard: Le Principe d’Incertitude, and Shen Wei Dance Arts. She has also appeared in work with Yve Laris Cohen, Heidi Howard and Liz Philips, Nicole Mannarino, Ryan McNamara, Sam Roeck, Adam Weinert, Christopher Williams, Ellis Wood, and Bill Young amongst others, and was a “reperformer” for Marina Abramovic’s 2010 MoMA Retrospective. Cynthia holds teaching certifications in both Yoga and Pilates and currently studies Craniosacral Therapy with Etienne Peirsman. She also holds a certification in Female Ejaculation and the G-Spot, has trained in Holistic Pelvic Care TM with Tami Lynn Kent, and studies sex education with Isa Coffey of WiseBodies. Cynthia is currently working on a new creation with John Jasperse.