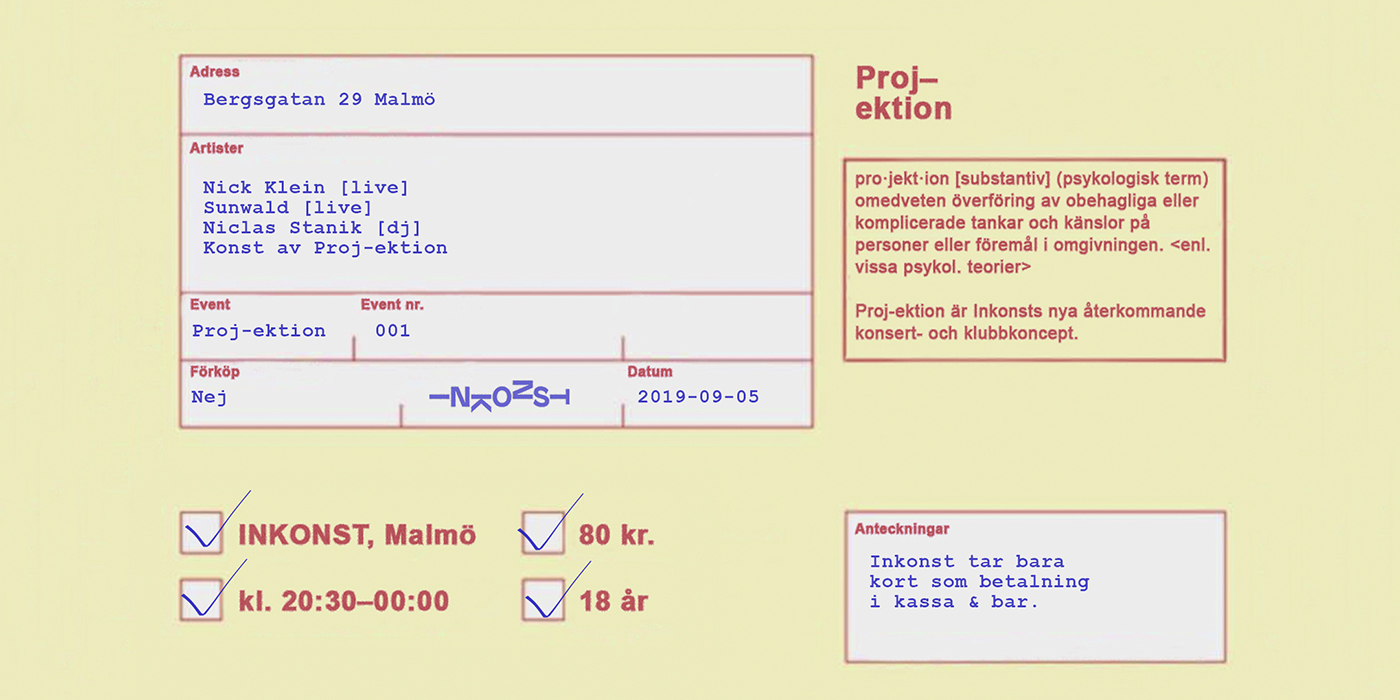 pro·jec·tion [noun] (psychological term) unconscious transmission of unpleasant or complicated thoughts and feelings onto people or objects in the environment. <According to some psychological theories>

Proj-ektionis a new concert and club concept hosted at Inkonst, created by Jonatan Gyllenör & Niclas Stanik. Gyllenör & Stanik met for the first time on the 20th of January 2018, when working together at Inkonst. It was love at first sight. Gyllenör is a filmmaker and the founder of Fennek Film, which is behind events like Erotikafton and Förspelet. Stanik, who is a musician and sound artist, runs the label Skiss/22 where he releases artists working with and beyond the categories of noise and ambient using the medium of cassette. Through collaboration Gyllenör and Stanik have intertwined their expertise creating Proj-ektion.

Nick Klein
For the first edition, Proj-ektion will host Nick Klein. Originally from Miami now based in The Hague, Nick creates electronic music straight from the heart. The raw and hard style that Klein embodies has been released through labels like L.I.E.S., BANK Records NYC and Total Black. This fall he is releasing an album with the Swedish label iDEAL. Playing Norberg Festival in 2017 and frequently touring around Europe, Klein has made a name for himself within the electronic scene. We finally managed to get him to Malmö.

Sunwald
Our second guest operates under the name Sunwald. Inkonst’s own Samuel Sundin creates everything from quiet sound art to atmospheric noise. Through his interpretation of Siri Aurdal’s sculpture “Bølgelengd/ Wavelength”, which was recorded in conjunction with the exhibition “Continuum” at Malmö Konsthall, Samuel has shown a sensitivity in the interaction between sound and space. Expect it to become intimate, noisy and loving.