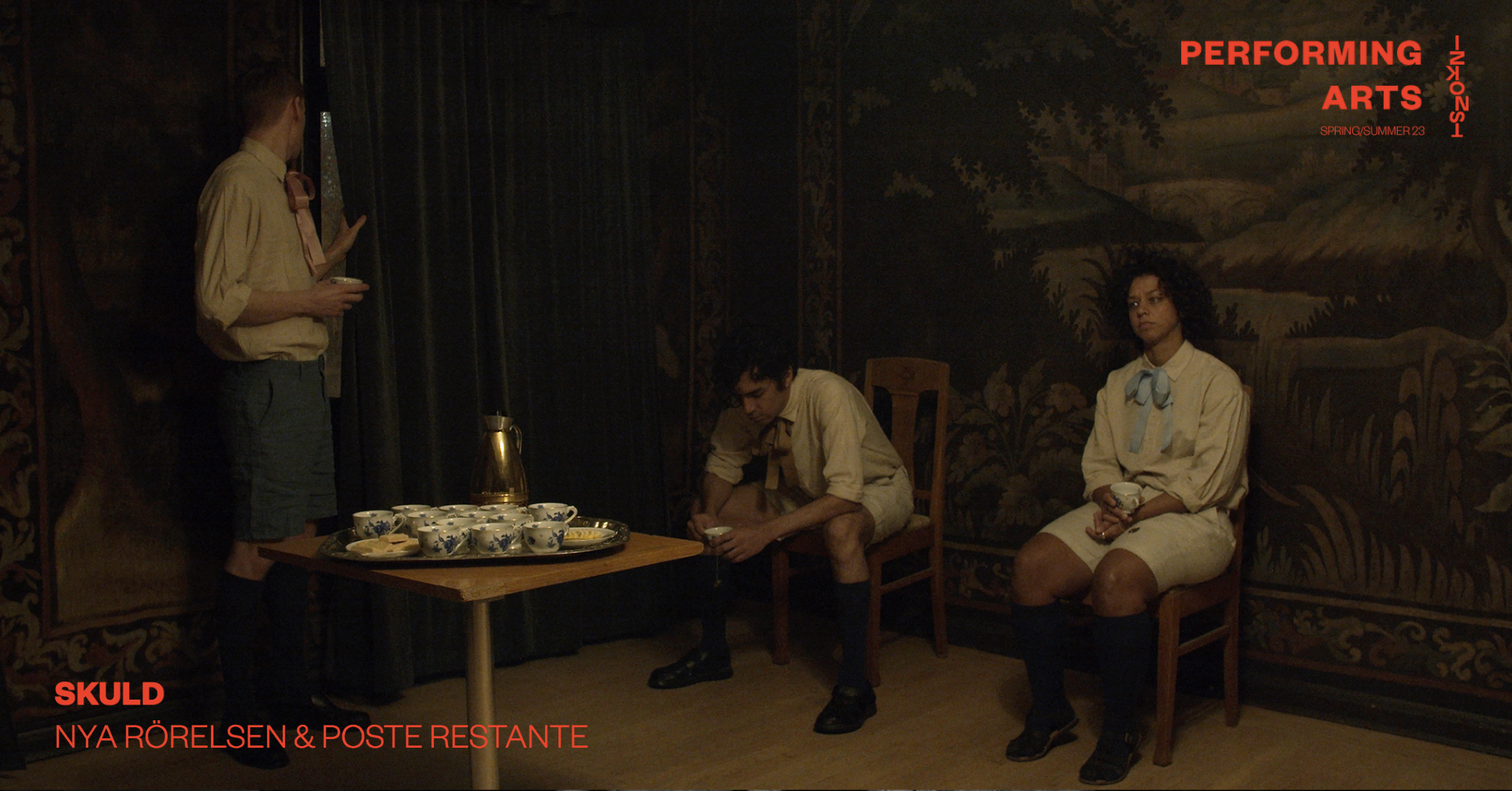 A communal dance in the footsteps of colonialism, with someone else's shoes on your feet.

SKULD is a participatory performance. A communal dance in the footsteps of colonialism, with someone else’s shoes on your feet.

Guided by the performers, the visitors conduct a seance in a historical building. Together the performers and visitors perform a ritual, where they lend their bodies to someone – or something – else. The seance is gently choreographed, with respect towards everyone’s consent. The purpose is to create new positions in the room, to leave space for the difficulties that come with reconciliation and spirits of the past.

By lending ourselves as a medium and becoming symbolic holders of old debts and demands, we hope to put some ghosts of colonialism to rest.

SKULD is produced by Nya Rörelsen in Skåne in co-production with Poste Restante and is supported by Kulturrådet, Konstnärsnämnden, Malmö Stad och Stockholm Stad.
Poste Restante

Poste Restante is a Stockholmsbased performing arts company that has since its founding in 2007 critically investigated the relation between work and audience aswell as the conventions that consolidate some perspectives as “commonly human” and some as “separate”.In 2023 Poste Restante is run by Linn Hilda Lamberg och Stefan Åkesson. SKULD is Poste Restantes first production where the artistic consignorship has been solely entrusted to one of our performers. In this case a performer who has had an invaluable role in Poste Restantes artistic development.
Majula Drammeh
The author/originator of this work is Majula Drammeh, member of Nya Rörelsen. The artist works interdisciplinary with dance and all-encompassing performances, with methods and artistic expressions that are characterised by her background in dance and choreography. Inher art she explores how performing arts can provide space for interpersonal connection andstrategies that support vulnerability. In Drammeh’s bodily practice she seeks to give space for both audience and performers to deal with their own bodily identity and the political bagage it carries. She strives to present interactive performing arts where the body of the minority is the norm, and hopefully contribute to the decline of the historylessness of which the non-white body is consigned to.
Nya Rörelsen
Nya Rörelsen – Koreografer i Skåne was founded in 2006 under the name “Rörelsen”, and has through the years hosted many of Skånes current dance-performers and artists. The Collective strives to function as a greenhouse for diversity and professional growth, where choreographers and dancers can collectively or individually develop their artistic methods and projects. Nya Rörelsen is actively working with inclusion- both on stage and with the audience – in cooperation with co-producers as well as employees. For example by making guidelines for inclusion of the audience in marketing or producing regulatory documents for employees to use to promote hiring people of minorities.