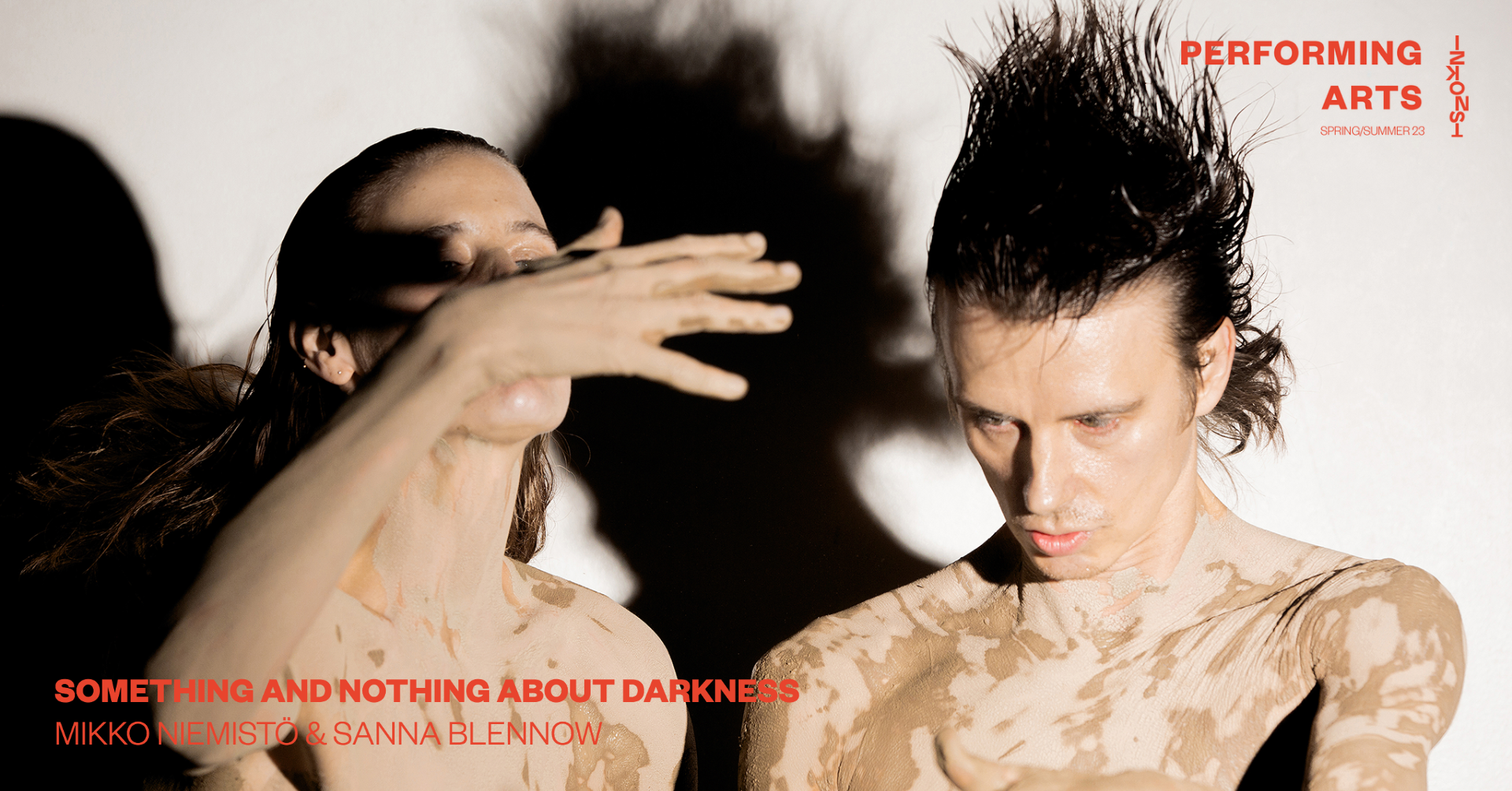 An energetic performance of movement, text and sound, that embraces nothingness and the animal inside of us, venturing towards the dark side.

In a landscape of swinging microphones, traces of sweat lingers in the air. Two bodies on the threshold of tipping over are fighting against gravity, speaking in languages we can’t understand, moving in uncanny ways.

The performance dwells in states of emptiness, anger and frustration and is searching for channels through which these can be projected. It zooms in on individuals caught between action and apathy, trying to figure out their role in an ever growing reality of imaginary needs and emotional triggers. It embraces nothingness and the animal inside of us, venturing to the dark side.

Something and nothing about darkness is an energetic performance where two bodies are constantly on the move. It is a collage of movement, text and sound which all arise from dream-like states combined with the urge to swim against the tide. The performance is a dream about leaving the mundane repetition of everyday life, a proposal to merge and to get lost in the limbo. The performers are being pushed and pulled, forced into different constellations, scenarios and doings.

Mikko Niemistö is a choreographer, performing artist and curator who works in Helsinki and abroad. He has created both solo performances and multidisciplinary works where different forms of art engage in dialogue. He has graduated as a Master of Fine Arts in Choreography from the New Performative Practices MA program from the School of Dance and Circus in Stockholm in 2017.

In his works, Niemistö explores the relationship between the human body and its environment and probes its conscious and unconscious physical connections to the structures of the society. He is especially interested in silent physical knowledge and accumulations of bodily memories. He currently focuses on the blind spots and shadow zones of everyday reality, like dreaming, protesting and the digital world. He has most recently showed his works in e.g. Zodiak, Helsinki, Moving in November -festival, Helsinki, Kiasma Museum of Contemporary Art, Helsinki, ImPulsTanz -festival, Vienna and far -festival, Nyon.
www.mikkoniemisto.com

Sanna Blennow is a choreographer, performer and educator, always curious to challenge formats and crossbreed artistic expressions Born in Stockholm 1988, moved to Copenhagen 2007 and then into a bag 2011 to travel the corners of the world. Sanna’s work has a sense of belonging (in-)between black box & white cube, in that very grey zone, where the realm of expanded choreography smiles with ugly teeth for experimental approaches

In the future, Sanna dreams about connecting a beak of ambition and wings of desire to navigate between the Nordic countries and The Americas, where Sanna’s melting heart beats with a sense of belonging