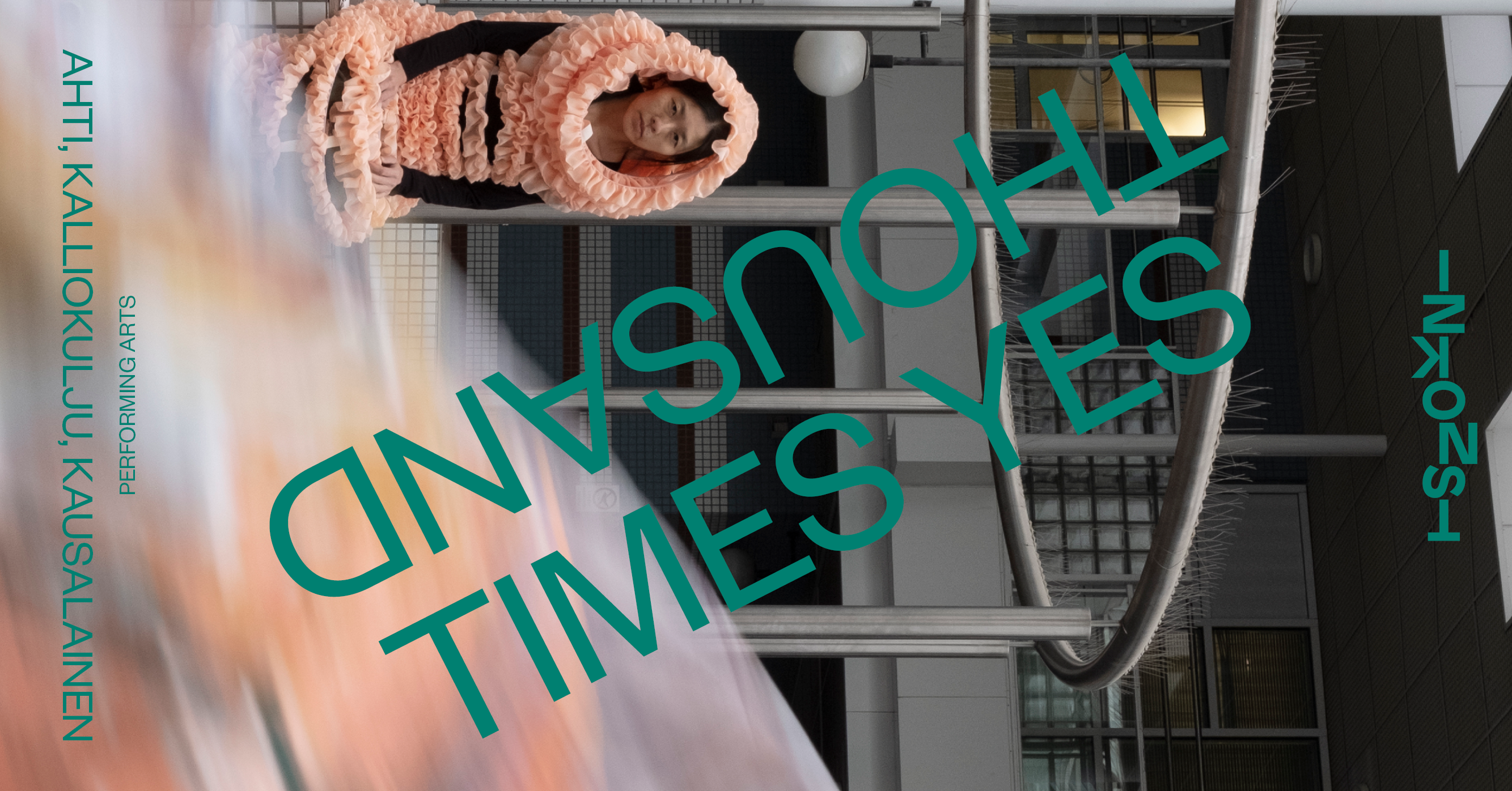 Experimental chamber opera about the importance of listening.

An ancient organism in the Earth’s crust is rising towards the surface. It’s movements resonate in the bodies of minerals, bacteria, fungi, gasses and the atmosphere, causing instability and uncertainty that cluster into a web of unexpected conflicts. Our protagonist, a human called G, is unwillingly equipped with a skill to connect and communicate with different bodies and beings. She is summoned to mediate between the conflicting parties – and eventually with the ancient organism itself.

Thousand Times Yes is a philosophical, haunting and poetic investigation of the limits and possibilities of language, communication, space and the body. The piece is a collaboration between composer and musician Marja Ahti, librettist Jenny Kalliokulju and director Essi Kausalainen moving fluently across different genres and disciplines. The performance challenges the concept of opera, its aesthetics and hierarchical tradition. By telling a story of companionship and coexistence, Thousand Times Yes makes space for alternative futures.

Ahti, Kalliokulju and Kausalainen are interested in the practices of softening and opening that allows to make space for the quiet voices and bodies to be heard. They are interested in complexity and continuity, the slow and the layered. In their previous works they have collaborated with gardens, plants, glaciers and animals as well as with biologists and researchers. This time they have gathered a multidisciplinary, intergenerational and international working group to fabulate alternative futures for living and working together.

Marja Ahti is a Swedish-Finnish composer and sound artist based in Turku, Finland. Ahti works with field recordings and other acoustic sound material combined with synthesizers and electronic feedback in order to find the space where these sounds start to mimic each other or communicate. She makes music that rides on waves of slowly warping harmonies and mutating textures – rough edged, yet precise compositions, rich in detail. Ahti has presented her work in many different contexts around Europe, in Japan and the United States, such as Sonic Acts (Amsterdam), The Long Now (Berlin), ISSUE Project Room (New York) and Edition Festival (Stockholm). She is currently active in the duo Ahti & Ahti with her partner Niko-Matti Ahti and in the artist and organiser collective Himera.

Jenny Kalliokulju is a Swedish artist and poet based in Bjuv. Her multidisciplinary practice explores the tension between movement, stagnation and translation, combining memories, found materials and language into installations, paintings and poetry. Kalliokulju’s book RODINIA, 2016 (CLP Works) is a fragmentary creation myth or a choir song of antiquity of the planetary futures and histories. Most recently she has published a book together with artist Sigrid Sandström: Försvinnandets förbindelser – en mobil samling, and have shown her works at places such as Galleri Thomas Wallner (Simrishamn), hangmanProjects (Stockholm), Hordaland kunstsenter (Bergen), Justmarried (Osaka), Galleri Ping-Pong (Malmö) and Växjön Konsthall.

Essi Kausalainen is a Helsinki based artist whose works operate through performance, textile, text, audio and video, exploring the sensuous capacity of our bodies and their philosophic and ethical materiality. In her work, the body is approached as an open ended process made in, and shaped by, the complex relations with other beings, situations and environments. Kausalainen’s work has been exhibited and performed in venues such as Steppenwolf theatre (Chicago), Somerset House Studios (London), Bildmuseet (Umeå), Moderna Museet Malmö, Frankfurter Kunstverein and Nikolaj Kunsthal (Copenhagen).