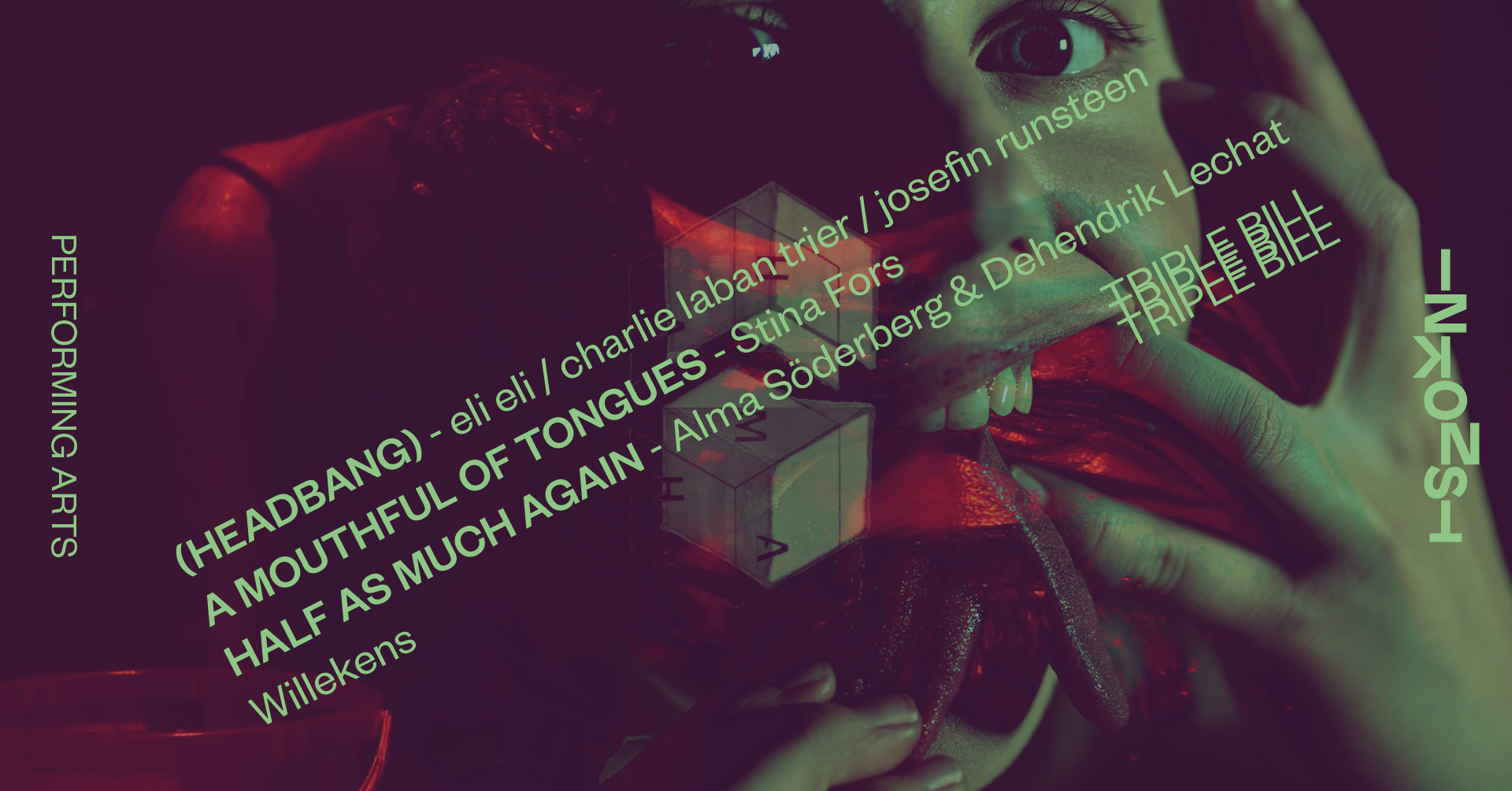 For this evening we’ve invited the top of the top from Intonals performing arts department. Names and acts you’ll never cease to forget and unfortunately for some of you – never cease to regret missing out on! Utilizing every inch of Inkonst we present three different performances: (headbang) by Eli Eli, Charlie Laban Trier and Josefin Runsteen, A mouthful of tongues by Stina Fors and Half As Much Again by Alma Söderberg and Dehendrik Lechat Willekens.

With the Triple Bill we’re ending the performing arts season as well as announcing the spring season program of 2023, simply put – we’re going out with a bang!

A MOUTHFUL OF TONGUES – STINA FORS 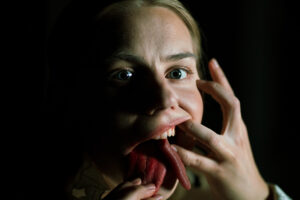 In the performance A mouthful of tongues, the mouth becomes the theatre. Experimental vocal techniques such as growling, ventriloquism, tongue work-outs, dinosaur calls and more create a journey where many bodies and sounds are brought into dissociative relations. The body is not in relation to its voice or its sound. Confusion comes and goes and manners of communication fracture into one another. This performance celebrates the mouth as a potent channel where communication can be formed, expressed, torqued, destroyed, and resurrected. We hear fragmented stories, thoughts and emotions of other places, of other creatures, of something that sounds like English but is not. A mouthful of tongues premiered in June 2022 at brut Wien in Austria.

Stina Fors was born in Sweden and works as choreographer, performance artist, drummer, and vocalist currently living in Vienna. She sometimes kills with a powerful voice, sometimes seduces until exhaustion. Her howls are not bare words; they are fused with spits and fluids, a certain wetness – punches in the face, licking of your heart, lubricant for one’s soul. Stina found her love for sound and the voice and from there developed a repertoire of solo performances driven by the interest for what a ‘sounding body’ can be. Experiment and improvisation is often used live as a creative strategy. Stina graduated from the School of New Dance Development in Amsterdam 2019. She was awarded with the Moving Forward trajectory at Dansmakers, DansAteliers and DansBrabant (NL).

She performs regularly with her one woman punk band “Stina Force” in the underground scene and she has participated with her work internationally in various festivals of dance and music, examples include: Inkonst (SE) Danshallerne (DK) Ufer Studios (DE) Brut Wien (AT) CAMPO (BE) Spider Festival (SLO) Centrale Fies (IT) Subbacultcha (NL) Truckstop Alaska (SE) Watermill Center (US)

HALF AS MUCH AGAIN – ALMA SÖDERBERG & DEHENDRIK LECHAT WILLEKENS 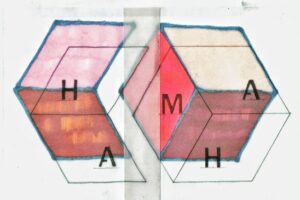 Half As Much Again is a continuation of musical explorations by Alma Söderberg and Dehendrik Lechat Willekens. The title is a linguistic construction which captures a specific polyrhythm; in this case it reflects a relation of (to speak in whole numbers) two against three. The application of polyrhythmic thinking and doing has occupied Alma and Dehendrik for several years in several projects and collaborations. At Inkonst we want to share new sounds that we have been making and putting together in the spring, summer and fall (and, come to think of it, winter as well, actually) of the memorable year 2020. Here is a more descriptive way to put into words what we will be presenting: sample based rhythms and groove based voice.

Our gratitude goes out to the people of Inter Arts Center and Inkonst who trusted us with their space and time. This project has received funding from Konstnarsnämden.

Bergsgatan based artists Alma Söderberg (Malmö, 1983) and Dehendrik Lechat Willekens (Turnhout, 1985) have been co-investigating the relation between music and dance or, if you like, sound and choreography since a decade now. They have done this in the format of concerts as the performative band wowawiwa, but usually they collaborate on Alma’s choreographies. Deep Etude showed in Intonal 2022, the Cullberg performance Noche was in Inkonst just weeks before that. The piece that the whole collaboration started off with is 2014’s Idioter, which they coauthored and toured the Western European Performance Circuit with. 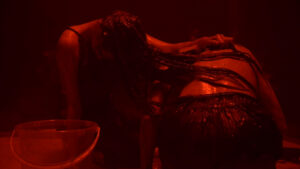 (headbang) is two dancers situated in a large transparent cube and a live musician with her full drum set.

They engage with each other’s rhythms. The musician flows through a wave of whispers, strong percussions, loops and screams. The dancers are banging their heads. Later they transform into slugs, intimate whippers, into stain-makers.

Together the performers bring in discourses around witches, vulnerability, and care through practices that are usually connoted with the more masculine dominated heavy-metal scene. They invite the audience into a space of grief, celebration and ecstasy.

(headbang) is a two headed medusa

( ) is a total collapse – falling – trespassing through each other – cross-pollinating

(headbang) is an intimate romantic gesture

( ) is a fluid-bond – committed to breaking barrier

(headbang) is an investigation on the traces we leave on each other, on a society and our planet

– long strokes, long left traces, long after they are gone.

(headbang) is filthy, fallen angels refusing the patriarchy of the male god

(headbang) is holding hands, or holding your hair when you throw up

(headbang) is a slippery slope

( ) is an ecstatic slow mover

( ) is landing from outer space and growing infinite

Charlie Laban Trier (he/him) born in Denmark 1987, is a dancer and choreographer. He’s based between Amsterdam and Copenhagen. Graduated from SNDO/AHK, 2018. He’s a member of Jacuzzi – an artist-run space in Amsterdam where dance/performance and other time-based media swim together. His dance background stems mainly from dances connected to house music. Being in different queer scenes and living as a transgender-person, is further a big Teacher in his thinking and approach to work. Charlie thinks of dance as a slippery matter, and also as a joker that can inhabit many forms/images all in the same instance – seducing its viewers while gently/cheekily slide out of shape. He’s interested in spaces, concepts that aren’t trouble-free, where nothing is innocent and we therefore all have to deal with the complications of participation, but also every-body’s responsibility for disrupting stability.

elieli (Elisabeth Raymond), is a choreographer and multidisciplinary artist navigating through a field of entanglement, connection and un-rootedness. They are working with scores of mapping and listening to the gentle pushes of bodies; bodies as in landscapes, bodies as in matter, bodies as in beings- how one thing is never separate from another. Their work can be experienced through performances, workshops, writings, films and installations. 2019 they graduated from SNDO (School for New Dance Development – Amsterdam University of Arts) with a bachelor in choreography. They are an in-house artist at ”SKOGEN, Masthuggsterassen” and part of the art-collective ”Glada Sprutan” as well as Fylkingen in Stockholm.

Josefin Runsteen is a Swedish multi-instrumentalist, producer, composer and arranger. She was raised classical violinist, and in her teens she started exploring more instruments and genres, touring with some of the greatest Scandinavian popacts such as Ane Brun, Håkan Hellström, Jens Lekman, Loney Dear, Anna Järvinen and later on also international acts; Damien Rice, Feist and Frank Ocean. On the jazz scene she plays regularly with bands such as Fire! Orchestra, Mats Gustafsson and Mariam the Believer, amongst others. 2017 she was violin soloist with the Royal Stockholm Philharmonic Orchestra at the Polar Music Prize Ceremony, and besides that she has played with dozens of Classical orchestras in Scandinavia, both as percussionist as well as vocalist and violinist. 2019 she won Swedish National Radio’s prestigious award ”Jazzkatten”- in the category “Newcomer of the Year 2019” and 2021 she was granted with Konstnärsnämndens 10-year grant for working artists. August 2020 she released an improvised duoalbum called ”Thank God the Plague is Over” with the Canadian Nyckelharpist Charles Spearin (Feist, Broken Social Scene) and in 2021 she released a soundtrack composed to the Butohdancer FRAUKEs performance ”Hana- Three Bodies”. 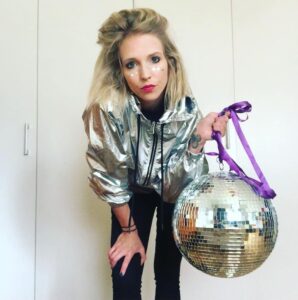 “Without pesticides, the organism LIMA sows seeds with the help of organic sounds in floating tones”. 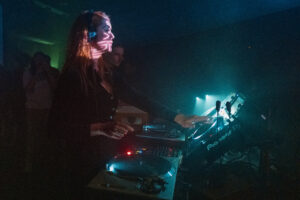 For the highly versatile producer and DJ, melancholy and euphoria are not opposites — they’re inseparable. Sharp edges soft to the touch, like translucent lace on sun-cracked asphalt.  Josefine mixes different textures of techno with bouncy house, earth-shattering UK bass and rough breakbeats.