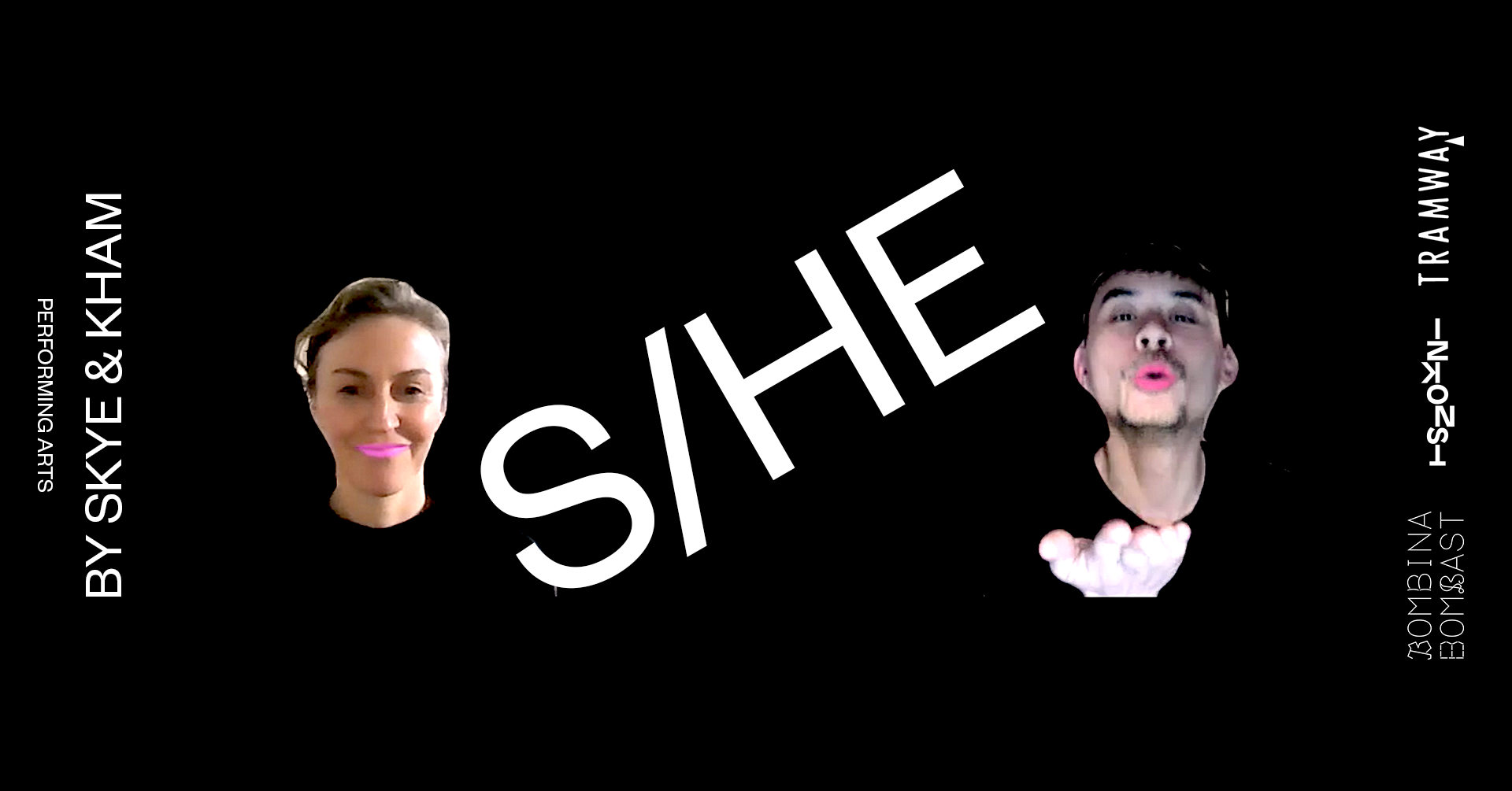 S/HE is an online performance by dance artists Skye Reynolds and Khamlane Halsackda. A journey between 2 friends attempting to make a show live on zoom.

She’s in Scotland, He’s in Sweden. Together they create a hands-on collage alluding to visual art and drawing inspiration from historic & contemporary heroines. Curious about their bodies & mindful of ‘the gaze’ they explore how technological and gendered perspectives impact the way we see or want to be seen. What does corporeal intimacy mean when we’ve been so physically distanced? Can they find sanctuary, empowerment and the human connection we all crave, even in the digital realm?

This project is formed of 2 parts artistically & thematically connected:
Part 1: ‘S/HE’ is presented online, June 2022.
Part 2: ‘Into Flesh’ is a live, on-stage performance when the artists finally meet in person, 2023.

Skye & Kham first met and collaborated in 2012. This project began 3 years ago and is touched & sustained by their inquisitive, creative friendship. The performances are a window through which they interpret and transform their experiences of ‘making art’. Reflective, playful & vulnerable, despite ever-shifting terrain it’s a moment to dance together.

Khamlane Halsackda – Choreographer/Performer/Project co-director graduated from Rambert School in 1998 and was employed by Richard Alston Dance Company. Since then he has worked for Henri Oguike Dance Company, Wayne McGregor/Random Dance, Glenn Wilkinson, Niklas Laustiola, Alicia Herrero, Bonachela Dance Company, 2007 Bank Project, Fabulous Beast Dance Theatre, Art of Spectra (r&d), Shobana Jeyasingh Dance Company, Maresa Von Stockert of Tilted Productions and most recently Nigel Charnock + company. His own dance theatre and social comment based performances are focussed on creating discussion and debate around identity and what this could mean. He was selected for Dance net Sweden’s co-production 2017, a work called Ursäkta oss. His latest dance/theatre production is The Right|s of Spring co-directed with Maria Stamenkovic Herranz. Khamlane also creates performative concepts for galleries including installations ‘Permission to grieve’ and ‘An exercise in learning Swedish’. He is a member of Nya Rörelsen (The new movement), a collective of choreographers based in Malmö, Sweden.

Skye Reynolds – Choreographer/Performer/Project co-director: is a Scottish-based dance artist, performance maker and educator working across multidisciplinary platforms in the UK and abroad. Her creative practice draws upon theatre, comedy and the politics of real life. Projects & collaborations include working with: Curious Seed, Janis Claxton Dance, Jo Fong & Derevo. Skye has been a dance artist in residence with Imaginate/ Edinburgh International Children’s Festival & Dance Base and she was a Movement Director with National Theatre of Scotland. She was invited to Iran to co-devise new dance-theatre with British Council / Fadj International Festival. Skye received a #LoveDanceScotland Recovery Bursary in 2021 to develop new solo work; and is a collaborating performer with Tess Letham’s ‘Remedy For Memory’ @Dance Base, Edinburgh Festival 2022. Skye has worked with people of all ages, abilities & contexts in schools, post-war zones & Paris Summer Academy. She’s an Associate Artist with Starcatchers & is currently training in The Feldenkrais Method.

Tramway is a renowned international arts venue with an interdisciplinary spirit whose mission is to enrich and inspire our communities by providing ambitious, innovative and culturally relevant contemporary visual art and performance. Through a dynamic year-round programme of dance, live art, engagement activity, festivals and free exhibitions, we aim to stimulate meaningful dialogue between artists and audiences, responding to the urgent cultural, social and political issues of our time. Tramway is both local and International in its outlook, fostering the professional development of emergent artists in Scotland whilst also presenting ambitious International work by artists from diverse backgrounds. Tramway is actively engaged in the commissioning, production, presentation, promotion and engagement around contemporary, interdisciplinary art. Our venue hosts many cultural partners and residents including The Workroom, The Hidden Gardens and Take Me Somewhere Festival.

Bombina Bombast is a touring performing arts company based in Malmö under the artistic direction of Emma Bexell & Stefan Stanisic. Since the start in 2011, the company has created over 30 original works for stage and film characterised by the meeting between performing arts and innovative technologies. The company has been presented at festivals and stages around the world: theatre festivals in Europe, the USA and Asia and film festivals such as Cannes and Sundance. In 2019, they became recipients of the Thalia Prize for the performance Eyewitnesses at Unga Malmö Stadsteater.